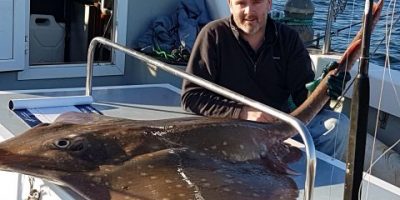 Ireland’s Clew Bay has produced its first skate of the year in the shape of this fish estimated at around 157lblb. Darragh McGee of Clew Bay Charters was the lucky angler, fishing aboard White Water II. The fish measured 201cm long by 148cm wide and qualifies as a specimen in Ireland. darragh@clewbaycharters.com Web: www.clewbaycharters.com