DESPITE all of the publicity that particle fishing gets in this and other magazines, I still think that a lot of anglers ignore the tactic on many waters and spend too much time fishing with boilies.
Boilies are obviously a great bait for carp and account for more specimen carp captures than any other bait. However, they are not the only successful bait out there and more people should take time to learn about particle fishing and it’s advantages in certain fishing situations.
Even those who do use particles often tend to be a bit blinkered and think of particles as the seed baits such as hemp fished in conjunction with corn and maize.
This is a good carp attractor, but there is a whole lot more to particle fishing than that.
Nuts, beans and pulses are also excellent carp baits and there are so many to chose from it can be a bit scary for the average angler trying to decide which to use.
Some work well when spodded in large areas and fished over for a period of time, some are more instant and are best fished in small quantities or even as singles, but all are good carp catchers given the right conditions.
Rather than concentrate on the run-of-the-mill baits that we read about all the time, I have decided to concentrate on three alternative particles that many people do not use and some do not even know exist as carp baits.

The first particles I have brought along are tares. The tare is a small pulse, which is dark in colour and quite light in weight. For this reason I quite like using them over light weed as they will fall through the water slowly and settle on top of the weed.
Tares are very under-rated and they are a bait that I have used to catch a variety of species including some nice carp. When fishing with a bed of hemp, tares are an ideal hook bait as they are only a little larger than the hemp and will be taken into the mouth of a carp quite readily when it is mopping up the hemp. 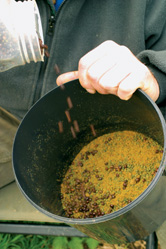 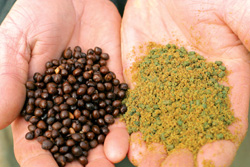 Chris mixes tares with a mix of pellet and groundbait.

One way in which I like to fish with tares is inside PVA bags of pellet and powder. The powder and breaking -down pellets gives off a lot of attraction without providing any real food – this comes in the form of the tares. This is a method that I have enjoyed some real success on over the years and one that I use quite a lot on well-stocked carp waters.
When fishing for the more wary carp on less heavily stocked waters, tares are still a good bait, but I would then use them a bit more sparingly and without the pellets and powder bags.

Because of the size of the tares, I like to use a string of three or four baits on the hair and a small hook tied with a simple knotless knot. I favour a braided hook link for this as it offers the small tares more freedom of movement on the bottom.
When fishing with tares in weed I will often tie a combi-style rig with my favourite Gardner Stealth Skin coated hook link material. This gives the rig an anti-tangle boom section and a supple braid section at the hook.

Fishy Favourite
A classic bait for all manner of species is the maple. Maples are similar to tares, but are larger and have a smell all of their own.
There are not many coarse species that do not like maples and the pulse has caught many a carp over the years. Maple is also an excellent flavour for catching carp and several boilies have included an element of maple over the years. Mainline actually has a new bait on the market based on maple and I believe it has already had some success.
Because maples are larger than tares they are also quite a bit heavier and I like to use something buoyant to balance the maple on a hair. Either a piece of foam or cork are good for this as they can be trimmed to just balance the maple, making it easier for a carp to suck in. Recently I have been using a piece of the fake corn on a hair with a single or double maple, depending on how buoyant I want the bait. The corn also adds a visual element to the maple and, because it is odourless, does not mask the smell and attraction of the maple itself.
I have been using two different hook links with my balanced Maple rig, tied either with the brown Stealth Skin for a braid/combi-rig or with Sufix Soft Touch nylon for short PVA bag rigs.
One way in which I will often use maples is neat, inside a solid PVA bag. One very good tip here is to cast the bag out as soon as it has been tied. This is because the juices from the maple will melt a PVA bag if you wait for too long before getting it out into the water. This melting does not happen straightaway, but will occur after a few minutes.

Maple Juice
The juices from the maples are an awesome attractor and so the maples should not be dried off in order to avoid the bag melting. Instead, the bag should just be cast without wasting too much time.
Maple will also work in conjunction with tares and the pellet/powder bags and this will obviously stop the juices melting PVA without having to drain them off.
I use the jars of Dynamite-prepared maples as I know they are prepared and soaked in their juices, which adds further to their effectiveness.
One tip here is to open the jars and separate the maples into bags and freeze them. This way, a jar will last a very long time and the freezing process doesn’t reduce the effectiveness of the bait. It is an idea only to freeze them once though, otherwise they can lose their firmness and become a bit mushy if frozen over and over again.
The juice from the jars can even be drained off before freezing and then used as an additive when mixing groundbaits. There will still be enough juice in the bags that go into the freezer and when the frozen maples thaw out the liquid will soak right back into the maples.

When you ask a carp angler about nuts the stock answer will probably feature tigers. There is a lot more to nut fishing than tigers and, while the little growlers are a very effective carp catcher, nuts such as brazils, hazels and peanuts are all excellent baits.
I have been fishing with peanuts on and off for a number of years and they have become one of my favourite alternative baits.
One thing I must stress about peanuts is that they should not be fed in large quantities. This is because carp can find peanuts difficult to digest properly in large amounts and so feeding with peanuts should be kept to a minimum.
Peanuts are extremely versatile and can be used whole or split in two. One of my favourite ways of presenting peanuts is to break them into their two halves and mount them with a slither of cork between them.
This makes the heavy peanuts much lighter and the cork can be trimmed so as to either pop-up or critically-balance the bait. I have recently been experimenting with a rig that Frank Warwick showed me where the counter-balancing shot sits on a piece of braid on the shank of the hook, above the barb. This has already helped me catch a few carp with pop-ups and I’m now trying it with my peanut and cork bait.
The oil from a tub of Dynamite Frenzied peanuts is a very good additive to groundbaits or PVA bag mixes and I know a few people who add it to other particles such as crushed mixed particles and other seeds. The oil gives the carp something to home in on and will not melt the PVA. In fact, it will even help avoid the liquid from other particles melting a PVA bag.

Preparation Tips
Fishing with particles is actually banned on many waters and people often ask me why. I think that this is largely due to the fact that lots of anglers use particles that are not prepared properly and this can make them dangerous to carp and indeed any fish that eats them.
For example, a popular particle is maize and it is used to great effect to catch carp. However, if the maize is not prepared for long enough it can continue to expand out on the lake bed. If this happens, once a carp has picked it up the maize can block the carp’s digestion system, and in extreme cases, kill the fish.

By far the best way to use particles is to buy them ready to use and not bother with the preparation yourself. There are many companies, such as Hinders, which offer particles already prepared, but my favourites are the ones in the Dynamite range.
The large jars contain enough particles for lots of fishing trips and, as I said earlier, they can be split up, bagged and frozen.
Anglers who use these particles do so safe in the knowledge that they are fishing effectively and safely.