Phil Jackson and Cathal Hughes, are the Lakelands & Inland Waterways World Pairs Champions and took away a cheque for £30,000 and DIAWA tackle.

From Craigavon in Northern Ireland and Galway in Ireland they are an example of successful north/south co-operation! Over the five day period the pair caught 117kg 560g of fish and took the championship by just over 4kgs. Overall individual winner Francis Mc Goldrick from Ballyconnell, Co Cavan has taken home a prize of over £1500 of DIAWA tackle.

Prizes were given out to the top 18 pairs of anglers from all over the UK, Europe and beyond. Full prize-winners listing on www.worldpairsangling.com

Speaking on behalf of the sponsors, Colm Breheny, Fáilte Ireland co-sponsor with Waterways Ireland of Ireland’s Lakelands & Inland Waterways said: “The World Pairs is event, the calibre of the entrants and the fishing that has taken place over the last five days will be a significant turning point in how wild Angling in Ireland is viewed world over. I would like to thank the participants for such a competitive week; The organising committee and our colleagues in Inland Fisheries Ireland and DCAL Inland Fisheries for preparing great sections and enabling us to promote  Irish fishing at the forefront of wild angling worldwide” 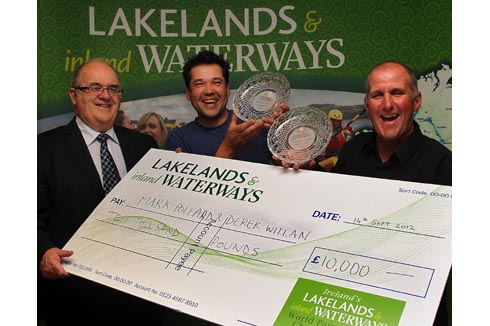