I can promise you the fishing adventure of your lifetime.”

A British angler has opened up the gateway for anglers to fish for world record catfish of the Amazon Rainforest – and many other sensational species.
The Amazon and some of its tributaries are home to the Giant Paraiba Catfish, a species known to reach weights in excess of 400lb, well above the existing world record for the species.
Steve Townson, known in the region as ‘The Fish Finder’ and a double Amazon Peacock Bass World Champion, has launched www.amazon-angler.com , which now enables British anglers to travel to South America on tailored fishing adventure holidays, to fish for this incredible species and many, many more.
Steve, who has fished in the region over 60 times in the last 14 years explained: “Not many British anglers know much about this hugely diverse habitat and fishery and if they were honest, it probably scares them a bit.
“But I know that if I were to take any of them out to the Amazon with me and to some of our special destinations, each and every one of them would come back with memories and experiences that would stay with them for the rest of their lives!
Steve has set up a variety of Amazon fishing holiday packages, from real luxury in camps and on ‘motherboats’, to sleeping rough on a hammock and going deep into the jungle, where no man has fished before.
“How about going to sleep under the rainforest canopy and waking up to an Amazonian dawn? The sights and sounds, the people, the local fauna and flora, the incredible variety of unusual wildlife, the whole experience just fires me up time and time again.
“It’s just being there, in what for me is the most wonderful place on Earth, the Amazon Rainforest.
As for the fishing, whether you like fishing with lures, flies or bait, the Amazon really has it all.
“You can enjoy the most unusual and exciting ‘coarse fishing’ for literally thousands of different tropical fish species. There’s spectacular lure and fly fishing for the most ferocious freshwater predators anywhere. Or you can bait fishing for the biggest, meanest, strongest and most diverse species of catfish on this planet! And you can do it all in your sunglasses, shorts, a shirt and a pair of sandals!”
There are many tackle-busting catfish to target in Amazon waters including the Giant Paraiba (also known as ‘the freshwater shark); so called ‘Rottweiler of cats’, the Jau, which grows to over 200lb; the express train and brutal Redtail catfish and the ‘chicken of the river’, the colourful Jundira catfish.
Of course the Amazon is by no means all about catfish. Other incredible species to target include the magnificent and infamous Peacock Bass (the main sport fish of the region); the fearsome Payara (also known as the Vampire fish due to its amazing set of teeth); huge Black Piranha that grow to 9lb; acrobatic pike-like Bicuda; prehistoric Traiarao; the enormous Arapaima (the largest freshwater fish in the world) which grows to over 600lb; the fruit and nut-eating Tambaqui (the national ‘spare-rib fish’ of Brazil)… the list goes on. There’s a rundown of all the species you can fish for at www.amazon-angler.com , including some great video.
Amazon-Angler provides organised adventure fishing holidays to 16 amazing destinations, and holiday packages with Steve Townson as your guide and some packages are available for under £2,000.
Steve who also stars and presents the ‘Welcome To The Jungle’ TV series from OnlineFishing.tv added: “I can promise you the fishing adventure of your lifetime.”

Paraiba Catfish – The Freshwater Shark
The Giant Piraiba (Brachyplatystoma filamentosum) is the largest catfish found in the Amazon Basin (if not the world). It can reach over 400lb and is also known as ‘The Freshwater Shark’.
The Piraiba has an elongated grey body and apart from the long whiskers, really does look like a big shark.
It often ‘explodes’ on the surface while hunting baitfish, but generally lives in deep holes and pools in slower running stretches of larger rivers.
If the angler who dares to fish for these leviathans doesn’t use a heavy enough outfit with a very strong rod and large capacity reel, a big Piraiba will strip 250m of 100lb line in seconds. Once hooked this fish will make blistering runs over and over again until he is exhausted enough to be brought into the boat or beached, or until you can’t take any more! 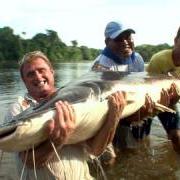