Clear waters are a considered a ‘must’ when targeting grayling. However, Ian Welch faces a challenging upper Kennet after heavy rainfall has made conditions far from ideal.

Coated in sparkling silver ‘chain mail’, shot through with purples, reds, indigos and black, and with a massive sail-like dorsal fin tipped and flecked with red and black, grayling are one of the most strikingly beautiful fish in the British freshwater fauna.
Yet, despite appearances, the fact they feed in the coldest water and, pound for pound, fight harder than anything, still they are neglected by many anglers.
A native British species, the ‘Ladies of the Stream’ have a scattered distribution and favour the upper river reaches where they thrive in clean and clear, fast-flowing water over hard sand or gravel substrates.
Such waterways are typically the preserve of game fishers and grayling have historically been viewed by fly anglers as vermin and removed because of their habit of digging up redds to feast upon the eggs of trout and salmon.
Thankfully times have changed somewhat and now the role of the grayling in the ecology of our rivers is viewed far more favourably, and enlightened management practices have resulted in catch and release policies amongst fly anglers. From the coarse angler’s viewpoint it is good news too, as economic circumstances have forced some fishery owners to take advantage of the additional winter income gleaned by opening up trout beats to the coarse angler.
As a result, these days it’s possible to find quality grayling angling on a day ticket basis on rivers all the way from the Hampshire coast to the Scottish borders. Today I’ve travelled to the upper River Kennet and a typical chalk stream habitat of small carrier streams which drain into the main river offering miles of diverse swims and habitat.

The Kennet grayling tend not to grow as large as their cousins on other southern rivers, such as the Dorset Frome or Hampshire’s Test and Itchen, but they make up for this in terms of numbers and fighting ability. And that’s fine by me because, above all, grayling fishing is not about size but about having fun!
The one thing likely to spoil my fun, however, is the weather. After a couple of dry, cold winters, which were perfect for grayling, it’s now decidedly damp!
Chalk streams are quick to run off after a flood, but with the water table totally saturated even the upper Kennet recently burst its banks and it is with some trepidation that I walk down to the river.
The good news is that the river is out of the flood meadows and back within its banks. But the bad news is the heavy colour. It’s possible to make out the bottom over the shallows, but the deeper glides are heavily stained and grayling are not lovers of coloured water. This is going to be a real challenge!
I’ve not got a lot of kit with me today, just a rod and reel with a landing net and a small bag. Grayling fishing is all about travelling light, remaining mobile and covering as many swims as possible.
Grayling are gregarious and shoal up in small ‘pods’, so when you find one fish there are invariably more in the same swim, and good presentation and correct feeding will usually result in a few fish before the pod is spooked and either stops feeding or simply breaks up.
As far as swims are concerned grayling are none too fussy, and picking out the most likely lies comes with experience.
They do like a reasonable push of water over their heads and a hard, gravel bottom, and my favourites are pacey, deeper glides above or below shallows or broken water. They can and do, however, turn up anywhere and it pays to search a swim thoroughly before moving on.
Even on shallows when you can see every grain of sand and every stone on the bottom, and you are convinced there are no fish present, run the float through anyway – you may just be surprised. Some of my best fishing has come from such swims!
Today my first choice of swim is the top of a long straight below a sharp bend. The water deepens rapidly and the full force of the current is slowed by an overhanging bush on the bend that creates a nice, steady pace downstream. It’s a peach of a grayling swim and if there are no fish feeding here I’m in big trouble!
Long trotting is an art form and is all about keeping your line perfectly straight all the way from rod top to float, no matter what the wind or current throws at you.
Allowing a bow of line to develop, which drags the float off course and swings the bait across the current, gives a very unnatural presentation. Such bait behaviour will not be tolerated by shy-biting roach and dace, but grayling are generally confident feeders and will occasionally intercept a badly presented offering, making them the ideal species on which to practice the technique. Get it right every time, however, and the presentation the technique offers is supreme.
My first run-through the glide below the bend results in a bite as I hold the float back at the end of the swim and allow the maggot to lift off bottom. The fight is a typically hard, thumping, writhing affair and the result, although not large, is a considerable relief. We have a grayling in the bag.
A couple of missed bites build up my confidence further still and a few more fish on the bank really get me buzzing. This swim is a perfect crease with the steadier and deeper glide along the far bank and I reckon most of the population within the stretch could be holed up here today – it could be a red-letter day!

A couple more decent fish follow before I notice the water rising and colouring up badly. There are weeds and debris coming through too, and within minutes the ideal grayling swim is totally unfishable!
I explore upstream to see what has happened and find the keeper has opened the sluice at the top of the beat to release the extra water and flush the stream. Perfect fishery management, I’m sure, but it’s really scuppered me!
Several swims produce a blank and even a switch to my tip rod, unorthodox but deadly, fails to provoke a response. I thought today was going to be an easy session, but it goes to show that fishing is never predictable, and although I hesitate to admit it the truth is that’s why we love it!
Walking back to the car I almost pass a short, shallow, weedy and streamy push below a waterfall, but remembering I’ve had the odd bite there in the past I push the float right down and run it through less than half a metre from the near bank. The float buries immediately and I strike, half expecting to have snagged on the weed, but the result is a fish – and a good one.
In the fast water it’s touch and go all the way to the net but my luck holds and eventually the weak winter sunshine illuminates the glowing flanks of a glorious ‘lady’ in my arms. She really is a glittering prize from the murky depths lighting up an otherwise dismal winter’s day.

Gearing Up For Grayling

A Preston Innovations Carbonactive 15ft/17ft float rod is Ian’s weapon of choice as the length options it gives are ideal for keeping in touch with the float when long trotting. The crisp action delivers perfect control at range, picking line off the water and setting hooks brilliantly, even right at the end of a long run. In addition to the fast tip there is plenty of forgiving action through the middle of the rod, which is perfect for cushioning the lunges of big fish and helping to prevent hook pulls.
Ian reckons far too many newcomers to grayling fish a little on the heavy side. Chalk streams are fast and grayling do fight hard, but this is no reason to jeopardise presentation and hooking success. Providing your tackle is well balanced it is surprising what you can do with light gear. His choice of line is Preston’s Reflo PowerLine in 2lb 2oz breaking strain (0.09 mm) coupled with a Grand Match fluorocarbon hooklength of 1.32lb (0.08mm).
Today the river is tea-coloured but fishing for sight feeders in the usually gin-clear streams gives little room for error. In the past Ian says that he has landed trout close to double figures and chub to over 6lb on his grayling tackle! 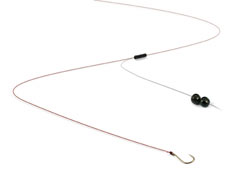 The Tip Alternative
Although float fishing is the traditional way to catch grayling Ian brought a tip rod with him as there are days when a stationary bait will score over a moving one.
“I opt for the softly, softly approach with a 0.5oz tip on a light bomb rod and 2lb 2oz PowerLine through to a 1.32lb hooklength and 18 hook,” he says.

“On this sort of kit bites tend to be solid and confident, and you have to strike early to avoid deep hooking.”

The rig is a subtle ‘Welchy’ paternoster created by anchoring the lead link on the main line through a Fox braid stop. A double granny knot prevents the lead link pulling back through the stop and a couple of BBs are all you need to hold station in most swims. It’s simple to set up, easily adjusted and both line- and fish-friendly.

Bait and Baiting Strategy
The number one grayling bait is maggot. Nothing else comes close and Ian has a couple of pints of whites with half a pint of reds to last the day. He mixes the colours up in a ratio of about three white to one red and feeds a good pinch every run-through.
Despite feeding more whites he tends to fish red on the hook as grayling have a great affinity for the colour and tend to single out the reds like ‘plums in a pudding’.
For this session Ian adapts to the horrible conditions with a main attack of white maggots as he feels they may be more visible in the coloured water. A double maggot is his standard offering but he will scale down to a single if he starts scratching for bites. If he finds himself on good numbers of fish which suddenly go quiet he’ll switch to three or even four grubs. This trick, taught to him by a keeper on the River Dever, has stood him in great stead over the years.
Ian says that steady baiting is the key to grayling success with a small pinch of maggots every trot-through being essential. Use a bait apron to keep those grubs to hand at all times, whether on the bank of wading, and get into the habit of feeding when you are playing a fish too as this will help keep the rest of the shoal occupied and interested. As a back-up Ian has a can of sweetcorn. “I never feed it, but it will occasionally bring a bonus fish when the maggot stops producing, often a bigger fish too,” he explains. “I’ve no idea why it works but it does. I can only put it down to the colour.”

tcf Top Tip
Grayling can take a long time to recover after a fight and will often lie upside down for several minutes before coming round. Providing the gills are working, leave them to rest submerged in your landing net until they have righted themselves and only release them when they are able to maintain their own balance.