The Total-Fishing.com team focuses on blockend (block end) or maggot feeders with a look at what’s out there and how to get the best from them..

What’s a blockend or maggot swimfeeder?
It’s a swimfeeder that closes at both ends but one of the ends can be opened to allow you to put bait in. They are also known as maggot feeders as that’s the main feed used with them, although a ‘caster and hemp’ approach is very effective on rivers. The bait stays in the feeder on the cast, but when it sinks to the bottom it escapes through the holes (or in the case of hemp and casters on rivers is washed out by the flow) creating an area of feed close to your hook bait to draw fish to it.

When would you use one over a groundbait or open ended swimfeeder?
The blockend feeder is a standard approach on rivers and is excellent for targeting fish like chub, dace, even barbel. The exception would be when targeting slow-flowing, deeper stretches holding bream and skimmers when a groundbait feeder approach would be more appropriate. Blockend feeders are used less than open-ended feeders on commercial stillwater fisheries because the fish respond so well to fishmeal groundbait in these venues. They can still work though and in summer a technique called ‘speed feeder’ fishing, which involves casting every couple of minutes to get loads of maggots into the swim, can get fish in a feeding frenzy. In winter when the colour drops out of the water and the fishing becomes harder, a small maggot feeder approach with a long hooklength can be deadly on commercials. You only need to feed very little in such conditions and a good tip is to put a bomb inside the feeder to stop you putting too much bait in.

Is size important?
For the feeder to be effective in running water, it needs to hold bottom, but only just. You fish with the rod pointing at a 45-degree angle upwards with the flow putting a bend into the tip. The idea is to balance things so that the feeder holds bottom, but if you get a bite, it’s dislodged. This registers with the tip dropping back (a ‘drop-back bite’) and usually the fish is already hooked. To help you achieve this you can add strap leads (also known as ‘dead cows’) that fold into the holes in the feeder. Putting a bow into the line between you and the feeder also helps the feeder hold bottom. On stillwaters you need to balance things between the distance you need to cast, how much you need to feed, and the time of year. For long-range work look for the bullet-nosed feeders, which are very aerodynamic. Generally speaking, in winter a small feeder that doesn’t create too much disturbance when it hits the water will be best.

Can they be used with worm?
The main use for a blockend feeder with worm is when you are after quality perch. Chop up a couple of lobworms into inch-long pieces and put them into the block end feeder. Once the rig is out in the swim, the juices will be released to attract fish in, but because the lobworms are too thick to get through the holes in the feeder, the only morsel of food the fish can actually eat is the one on your hook!

Can you use blockend feeder on canals?
Absolutely. One of the most popular winter tactics is to target eels or perch when the waterway is carrying extra water after heavy rainfall. A small blockend packed with a semi-chopped lobworm and cast down to bottom of the track with maggots or worm on the hook will attract eels and possibly a bonus skimmer. The same method can also be used to target perch close to the far bank, especially if there are overhanging trees and reed beds present. Casters are another good hook bait to fish with this method, as tench and carp often patrol far bank features.

Can you vary the speed of release of the bait?
Some feeders have mechanisms that can close up some of the holes and that will result in the bait coming out more slowly. You might want to do this when bites are hard to come by, or when fishing in deep water to stop bait coming out as the feeder sinks. Another way to slow things down is to wrap electrical tape around the side of the feeder, meaning that the bait can only escape through the holes in the top. On rivers when fishing caster and hemp, it’s a good idea to enlarge the holes with scissors to ensure all the contents are quickly released from the feeder.

What’s a ‘dink, dink’ rig?
This is a blockend feeder set-up that you don’t see used much these days, but when river fish are active it can be brilliant especially with dace and small chub. A standard ‘dink dink’ set-up has the feeder at the end of the line and one or more short paternoster hooklengths (only around six inches long) coming off the mainline above. It’s effectively a bolt rig, the fish hooking themselves against the weight of the feeder as they dart around grabbing food.

Is the colour of the swimfeeder important?
For general fishing not really. However, educated specimen fish that have been caught before can shy away from the sight of a light-coloured swimfeeder and so many specialist anglers try to choose a coloured feeder that will blend in with the bottom. A good tip is to camouflage your feeder using a permanent black marker pen.

Are there any uses from swimfeeders in predator fishing?
If you fish for pike, zander and eels, using a feeder full of chopped fish can dramatically increase your catch rate. These fish have an excellent sense of smell and will home in on the flavours released from the chopped fish. The large, flat-sided Drennan Oval Blockends are ideal for this use. 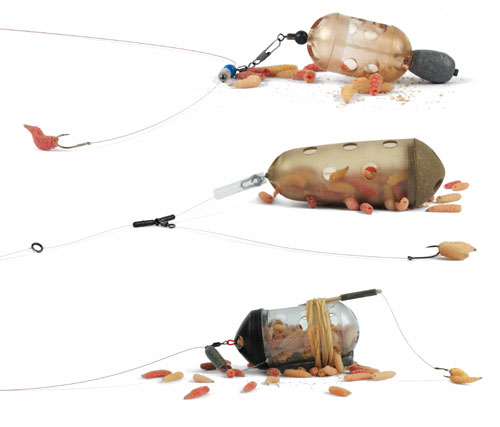