Although they can be an expensive investment (some cost in excess of £300), today’s centrepin reels are so well engineered they will last a lifetime. You just have to look at some of the antique ‘pins’ still around to see that quality lasts.

Most have handles, but once you’ve used a pin for a while you’ll probably bat the reel or use the holes in the drum to retrieve the line.

Do you need a line guard? The reason for using one is to prevent line from tangling around the back of the reel if you get an overrun, which can easily happen in windy conditions. They are, however, restrictive as they can get in the way when you bat the reel when retrieving; most experienced centrepin anglers fish without one but if you are new to centrepin fishing they can be useful.

The size of drum needed is dependent on the sort of fishing you’re likely to do. With a larger drum you’ll get quicker line retrieve, which is needed when long trotting with a float, although a smaller drum might be better if you’re using a leger and not casting far.

The smaller drums usually have a wider spool meaning the line doesn’t sit as deep on the spool and there is less bedding in, which inhibits casting.

FLOAT FISHING AND HOLDING A ROD

Also, if you are float fishing and holding the rod all the time you need a lighter reel, whereas if you intend to leave the rod in rests when legering it’s not so important.

Very few centrepins have a drag system as such. Those that do allow you to apply friction to the spool and therefore slow down the travel of the float downstream without having to use thumb pressure. This is of little assistance when playing fish but does help prevent line over-run on the cast.

All the centrepins tested are fitted with an on/off ratchet facility, which acts as a bite alarm when legering but also stops line coming off the spool during transit or when the rig’s in the water. Here we take a look at some of the classic centrepins to come onto the market over the last 15 years, some of them only available second hand these days, and put them through a reel fishing test on the Hampshire Avon.

WHAT TO LOOK FOR IN A CENTREPIN REEL

The Test
1 Does it have a line guard?
2 How much does it weigh?
3 What diameter is the drum?
4 What sort of drag system does it have?
5 Does it have a narrow or wide spool?

To give a fair reflection of what’s available we sourced a number of quality reels from major manufacturers while also looking at a couple of ‘pins’ made by smaller companies in the south of England.

Before being used in anger each reel was weighed and then loaded with 100 metres of last month’s tcf cover gift – 5lb Ultima Power Plus line.

There is no bail arm on a ‘pin’, so line lay is not an issue because the line is evenly distributed over the drum by hand as you wind.

To give the test a sense of history, we took the reels down to The Royalty Fishery at Christchurch, Dorset, on the Hampshire Avon. It’s a popular water for ‘pin’ anglers, both past and present, and fished the venue’s House Pool, a classic pin peg.

Spending an hour with each reel, we used a 14ft float rod and fished using the same stick float set-up every time. During the session, each reel was tested for ease of casting, thumb control of the drum, bedding-in of line on the retrieve and ease of adjustment from free-spool to ratchet when playing a fish. 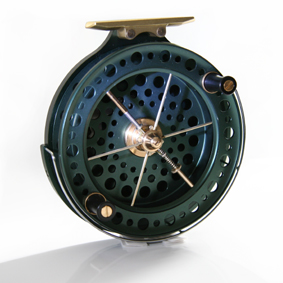 verdict: The reel has built-in tension adjustment, a great little feature, which allows you to trot a bait without using your thumb at a speed less than the river’s flow. I would have preferred to use the reel without the line guard fitted, as I like to fast-retrieve the line by batting the drum. The tension adjustment also helped when casting as there was less chance of line overrun if I messed it up – which I do far too regularly!

verdict: If you’ve got a budget to stick to then this ‘pin’ is well worth a look, especially for a first-time buyer. The only fault I could find is the offset location of the drag knob on the back plate – I found that it pressed into my finger as I fished and became uncomfortable as the session progressed. I also found my finger slipping into the holes in the back plate which could cause me to accidentally catch the back rim of the spool. 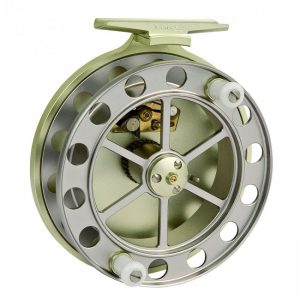 verdict: By far the lightest of all the reels. I was wading chest-deep in the water and trotting almost 50 yards, yet it was the one reel that did not result in my suffering arm-ache after an hour of constant fishing. If I had to pick one reel from the selection I tested this would be the one because of its lack of weight, uncomplicated looks and simple ratchet knob. 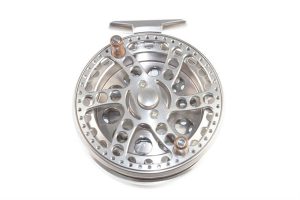 verdict: The best looking with all its snazzy engineering. But, looks apart, this is certainly good value for money as far as ‘pins’ go. Its angled-edge drum – none of the others have this – gives excellent spool control and the ratchet knob is located below the centre allowing it to be quickly engaged. It’s another reel with which I would be happy to fish on a long session. 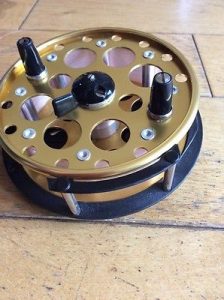 verdict: As ‘pins’ go this reel does the job; however, there were one or two issues that compromised my style. The reel has a very large back plate, but as I like to bat the drum to retrieve line on occasions I found myself hitting the plate rather than the rim of the spool. I also found that the line guard also got in the way if positioned at the front. That said, controlling the pace of the line downstream was easy and casting uneventful. 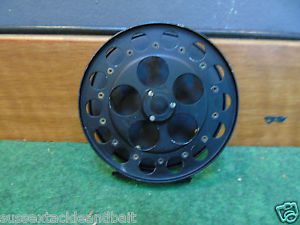 verdict: Originally designed and built by Hampshire roach ace Dave Swallow, this traditional ‘pin’ is very popular with float anglers on the Hampshire Avon. It’s a little on the heavy side but well-balanced and uncomplicated to use. I own one of the original Swallow pins and still use it today. If you are looking to upgrade to a reasonably priced reel then this is worth a look.

Price: Hard to find
Weight: 300g
Drag system: No
Ratchet system: Lever on side of back plate
Drum size: 41/2 inches
Width: 7/8 inch
Ball-bearings: Two
Line guard: No
Extras: The reel is supplied with a full year’s parts and labour warranty

verdict: This the second of two reels that are made on the south coast and is very similar in design and feel. To help control the pace of the line off the drum the reel has a knurled rim that allows less pressure to be applied to create the required friction. Quite heavy.

verdict: We’ve included this reel in our test as it’s one of very few swivel drum ‘pins’ that can be turned 90 degrees and cast like a normal fixed spool reel before returning it back to its original position for trotting. This will allow long casting of floats without grief and is superb for stress-free fishing on the feeder or rolling big baits, the function it was originally designed for. It is the most expensive, but for sheer fishing joy is well worth the investment if only for the challenge of playing big fish on the pin alone.

Conclusion
Float fishing on pacy rivers using centrepin reels is more popular today than at any time in the last 20 years.
A lot of the reel’s renaissance can be attributed to repeats of classic TV shows like A Passion For Angling and Go Fishing with John Wilson, but for many anglers difficulties casting with a centrepin reel is seen as a reason not to use one. Alternatively, you can check out other types of reels by visiting dream-guides
Most anglers take years to perfect the Wallis cast and, to be honest, unless you need to cast more than a few rod lengths out, a simple cast, where the a length of line is pulled off the drum with the fingers, should cover most anglers’ requirements.
I had no trouble casting my rig halfway across the House Pool this way with the eight reels used on test, and was able control the float’s journey downstream with each one by simple use of thumb pressure.
The most important feature of any of the reels is that it must be ‘friction-free’ to allow the line to be peel off the drum through the pull of the current, and all the ‘pins’ tested passed that requirement with flying colours.
Cost could be the restricting factor in the purchase of a centrepin, but most are engineered to a very high standard, so buying one is an investment as it will last forever and could even make you a few bucks in years to come.
So if you want to have a go with a ‘pin’ and only have a small budget the Shakespeare Golden Eagle or the TF Gear X-Pin – each under £100 – are worth a look.
If you can go that little bit extra, the Okuma Sheffield is my choice as the best value for money option. It’s a well-made reel and looks like it should cost far more than the £119.99 it retails at. If you prefer that classic look then the two independently made reels are more than up to the job but, in my view, are heavyish and not suited to holding for long periods.
Of the high-end ‘pins’, it was difficult to pick what I deemed to be my favourite. I own an original Young’s Purist reel and liked the John Wilson model which is similar. However, Grays’ The Benwick gets my vote, as its lightweight construction makes it the ideal reel for fishing long sessions which involve wading out in the river.
The Ray Walton Rolling pin is the most expensive of the eight tested but is the most user-friendly; casting is a doddle and you can fish any method, not just the stick float, without fear of line overrun or tangles.