The inaugural 2014 Fox Rage backed British Lure Angling Championship got off to a flying start with 36 anglers sharing a 125 fish catch on the Exeter Ship Canal.

With overcast and breezy conditions most anglers targeted the good head of quality pike that the venue is known to hold.

During the first couple of hours of the event this proved a good tactic, with a number of pike landed. The best fish being a specimen of 79cm to Piotr Malinowski, from Slough.

However, as the day wore on many of the visiting saltwater LRF (Light Rock Fishing) anglers began to catch good numbers of perch using both drop shot and jig tactics.

At the prize giving it proved that targeting smaller perch had indeed been a winning tactic. Adam Kirby, from Hampshire running away with first place having amassed an overall catch length of 498cm.

Adam(37) said: ‘I’m incredibly proud to qualify. I’m proud to represent the rapidly growing number of modern lure anglers and I’m really looking forward to the researching and planning stage ahead of the grand final – I never tire of learning new skills!’

In second place was Piotr Malinowski with three pike for 207cm, narrowly beating third placed Dean Pilgrim on 205cm. The top three will be joined in the final at Chew Valley by Dan Sissons, Rado Pipiewski and Mariusz Rokicinski.

Just six days later, 36 anglers took part in the second qualifying event. This time on the RDAA stretch of the Kennet and Avon canal at Froxfield. At almost 2km, the stretch gave competitors plenty of room to explore.

However, it was A section right beside the site of the draw that produced the early fish. With a number of pike and small perch caught around the resident house boats.

Those who opted to fish further down the stretch were rewarded with some large perch topped by a stunning 36cm fish for Surrey’s Matt Boast. With the fish spread out, and falling to methods as varied as drop shot, crank baits, jigs and spinners it proved a close affair.

With all the catch cards in, it proved to be Grzegorz Pawlak who had taken first place with 3 pike and 13 perch for 266cm. Only just beating Q1 winner Adam Kirby, with an all perch catch of 241cm. Mariusz Rokicinski, Greg Bafia, Mark Taylor, and Paul Parnell completing the top six.

With over 100 fish caught on the day competitors needed a total catch of over 150cm to make the top six. However, all was not lost for those who just missed out, as both Adam Kirby and Mariusz Rokicinski had already qualified. Meaning that 7th and 8th placed anglers Ben Church and Piotr Kruszewski had earned their place in the Grand Final.

Event organiser, Julian Chidgey said: ‘The next qualifying event takes place on April the 29th at Chew Valley Reservoir, where we should see some amazing catches. So far the guys using smaller lures have done well, but I think this will be turned on its head as we tackle the big pike of Chew and then the Grand Union Canal a fortnight later. The events have a great friendly atmosphere, and it’s great to see so many anglers taking part.’

There are tickets available for all the remaining events and you can enter now through the webpage (www.lurematch.blogspot.com). 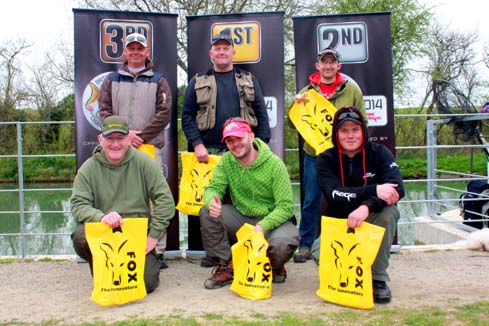