Are there any Cod on Chesil yet? You better believe it! Cod fever is already sweeping the angling community on the south coast of England.

For the past three weeks I have been hearing of a few codling coming in here and there. I had played t down as a few early or misplaced fish, or some of the deeper water Portland Cod making their way round for a feast in the rougher conditions.

However this weekend may have changed my thinking. It seems that we may have an even earlier cod run than the previous two years.

Each year it seems that the run becomes earlier and earlier. There was a time when this was the normal behaviour for the Bristol Channel and we would have to wait until November for the run of cod that were always much bigger. These days it is Chesil that seems to kick of the cod season. The down side is we don’t get as many big fish as we used to.

To be honest I still think it is a bit early to get too excited. We have just had a very big spring tide on the back of the first of the Autumn storms, and the chances are next weekend will be pretty poor for cod fishing.

On the other hand it might be fantastic, and as they say you have to be in it to win it! If I was going to be hitting the beach next weekend, I would be thinking about three things:

How, where and when, the motto of Fishing Tails.

Lets break it down and look at each part individually.

How To Fish Chesil Beach For Cod
For cod fishing, bait is one of the most important considerations. Cod love big smelly baits; the bigger the better. Unfortunately the bigger the bait the harder it is to cast out any distance (this is relevant to the where). Cod seem to prefer a larger number of baits more than any other species I fish for. It would be hard for me to prioritise the top baits, but if I was pushed I guess it would go like this:
Live peeler crab
live bait (pout or whiting)
Live hermit crab
Lug Worm. 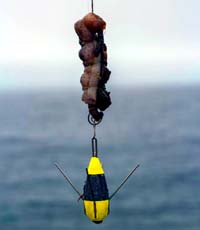 These would be closely followed by scallop frills and Squid. Mackerel is also a good bait, but it does attract lots of dogfish.

With the exception of my live baits, I prefer to use at least 4/0 Pennel rigs. The strength of the tide will then govern on the length of the trace; the stronger the tide, the shorter the trace.

I met up with my friend and fellow guide Paul Black on Saturday, when the tide was nearing the peak of the springs. He had been fishing for a few hours with a combination of baits including peeler, sandeel, lug and hermit crab.

He had been using a Pulley Pennel rig that gave the rig body a long flowing trace of over 3ft in length. Most of his baits came back untouched. He then opted to shorten his rig and go for a simple clipped-down Pennel rig, that when released was only 12 inches long. This had the effect of keeping the bait closer to the sea bed. Almost instantly he landed the first cod of the afternoon to peeler crab. This was quickly followed by another.

Unfortunately for Paul, this was almost the last of his peeler crab. He had a half a crab left that he used, only to miss an almost instant bite. Not to be deterred he loaded up his next cast with the last of his frozen hermit and had his third cod of the afternoon. Having now run out of bait, he was a bit disappointed that he had not switched to a shorter rig earlier.

My other task that day was to meet up with one of the site’s regular contributors; Leo from Poole. He was down for one of his regular trips to Chesil. He told me earlier in the week that he fancied an early cod, and asked my opinion on a couple of marks. Both marks he fancied had potential, but as they were popular marks, I rightly thought that they would be crowded. Instead I suggested another mark that had produced well for me last year.

Leo turned up a lot later than he had intended, with his twin daughters, who were more interested in catching mackerel and garfish than cod. They spent the remainder of the afternoon catching fish, whilst Leo concentrated on getting a cod. Leo had not managed to get hold of any peeler, but he had dug a couple of pounds of fresh blow lug. He combined this with a whole small calamari squid, to create an irresistible cocktail.

It did prove to be a good bait as Leo managed to land his target of an early season codling. Nice work!

Where To Fish Chesil Beach For Cod

Looking specifically at Chesil Beach, there are a number of marks that fish consistently better than others. 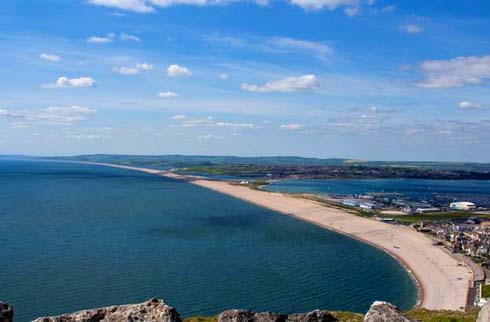 The deeper water between the Bridging Camp at the Weymouth end of the beach, and Dragons Teeth to the right of Abbotsbury beach car park, always seem to produce more fish. The fish normally show there earlier and hang around later than the rest of the beach.

The down side is you either have a long walk, or you need a boat to cross the Fleet. The main crossing points for boats are Bridging Camp, Moonfleet and Langton Herring. The locals are very protective of these marks. Boats that have been secured to the bank often mysteriously disappear. I would also add a note of caution. Crossing the Fleet can be like crossing a fast flowing river at times. Unfortunately several anglers have lost their lives trying to cross in the past.

There are other marks outside of those already mentioned, but these can often be very specific and being as much as 50 yards off them can often have the same effect as being 50 miles away. If you do find a mark the produces for you on one occasion, make sure you pin point it well for a return journey, as they often produce time and time again. These marks can be found from Chesil Cove to Ferrybridge. Similar marks are to be found at Abbotsbury, West Bexington and Cogden.

Being able to launch a bait to the horizon can have its benefits, and I would say that the longer casters do often catch more fish. But don’t let that put you off too much. If you can get a decent sized bait out 60 or 70 yards then you are in with a good chance.

When To Fish Chesil Beach For Cod

Cod are traditionally a winter fish. The odd summer specimen turns up on the beach, but October normally heralds the first run of codling on Chesil. The fish often appear in year classes; if you catch one 3lb or 7lb fish, you are likely to catch a few more around the same weight in that session. The larger cod are much more solitary, mainly because there class mates have been wiped out over the years. Each year Chesil throws up a 20lb plus fish to lucky angler who happens to be in the right place at the right time.

I often hear anglers say that over the top of high water, or on a spring tide is the best time to catch cod. Well on Chesil that is not strictly true. The spring tides often make it hard to keep the baits out at distance. It is easier if you have the luxury of being able to walk up tide for 50 yards and let a bow of line out as you come back to your rod rest, but this is often impossible when the beach is packed with other anglers.  A few days either side of a spring tide are normally better. I have noticed that different marks fish better at different states of the tide. The Ferrybridge end towards Portland seems to fish best from three hours into the flood, until two hours after high water. Abbotsbury on the other hand fishes well over low water.

Without a doubt the best time for cod fishing is after a good south westerly blow. As the wind dies down, you will have the opportunity to cast into the coloured and churned up water that contains lots of disturbed food, that will have brought in cod in from miles around.