England came back strongly on Day Two of the World Feeder Fishing Championships 2012 fished in Ghent, Belgium to score 29 points and haul themselves into the bronze medal position.England were fifth after the first day when Darren Cox endured a very tough match, finishing 19th in his section of 22.

At the other end of the scale Phil Ringer put himself in with a chance of gold with a section win on a day when England finished fifth on 32 points with a 24.958kg total. After day one Ukraine led on 23pts, with Hungary on 25, Holland on 26, Belgium on 30 and England level with Austria.

Skipper Tom Pickering came into the team on Day two, in match when anglers had to juggle fishing for bream and for smaller silvers on a shorter line.
It was Holland who took gold, following up on day two with 27 points and a 53 point total.

Hungary claimed the silver by three points from England, who totalled 61. Hungary (383) caught nearly twice as many fish as Holland (192) for a very similar total weight of around 52kg.Ireland finished in 20th position.

Steve Ringer followed up a section fourth on Day One with a third on Day Two and he and his brother Phil just missed out on individual medals, finishing in sixth and seventh position.Individual gold went to Hungary’s Attilla Erdei with a three-point 18.827kg total, with home nation Belgium dropping to eight place overall.

Dean Barlow was solid for England with a third and seventh in section, and the same goes for Mick Vials, who finished fifth both days. Tommy Pickering also held his end up with seventh in his section on day two.
The 2013 World Feeder Fishing Championships takes place in South Africa.

For full results and video reports on the World Feeder Fishing Championships 2012 and other international events, visit www.matchangler.com (members only). 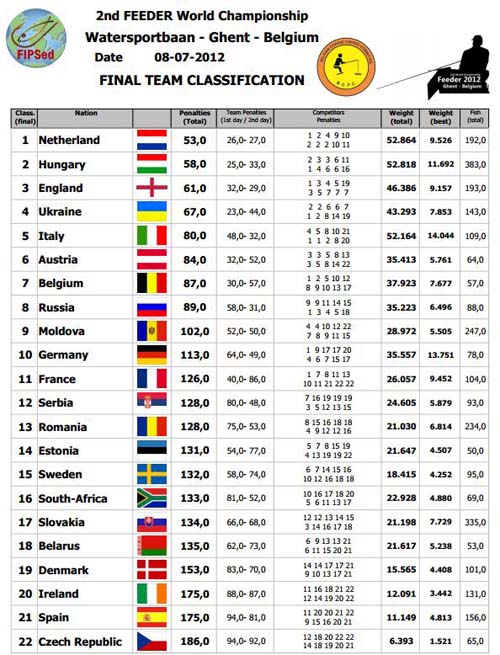 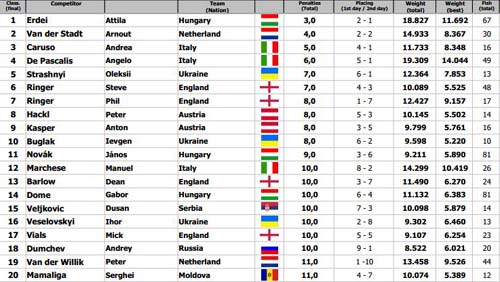