The silver medal improves on their 2007 outing in Serbia and Montenegro where the team came home with bronze. In South Africa the team faced a new challenge on the 25 mile dammed reservoir in Bloemhof, where they finished with 8 points and a final combined weight of 1,981.30kg worth of fish, significantly ahead of third placed Namibia with 13 points and 1,599.36kg.

However, it was a determined South African team that took centre stage as they used all of their local knowledge to their advantage winning team gold with 3 points and 3,418.25kg, as well as the top three individual placings. This level of domination was to be expected as the South Africans have travelled to Europe on many occasions over the last 30 years in an attempt to prise away the medals from the European teams; however they knew they would never have a better chance of winning gold than on their home waters.

Individually it was a similar story as England were once again ‘runners-up’ to the South Africans with the father and son partnership of Andrew and Thomas Maker putting in a fantastic performance to finish in fourth place with 794.64kg. Thomas is an exceptionally talented young carp angler and his fourth place re-affirms his standing as one of the prospects of the future in World Carp fishing.

There was further good news with a fifth placed finish for Ian Huntington and Peter Holehouse who ended with 646.41kg. The final England pairing of Billy Flowers and Jamie Londers put in a good performance to finish 11th with 540.25kg.

In essence the team achieved what they set out to do and finish the championships on the podium. The NFA would like to congratulate all the team members and of course team manager, Mitch Smith for an excellent performance.

NFA International Events Director Dick Clegg, added; “The team has achieved what they set out to do and considering the South Africans had such an advantage, the England team must be praised for their success. Mitch Smith has done a fine job and the whole angling community should be proud of their achievements”. 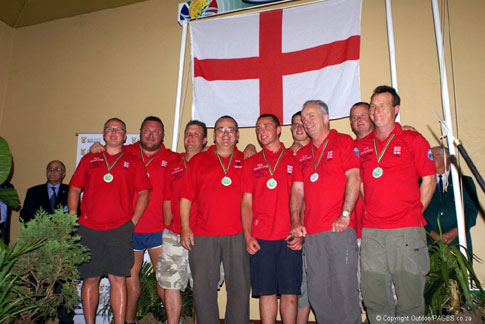