Plastic Fantastic
WITH the recent upsurge in results around the country that anglers have been having on artificial hook baits, I thought I would begin my new technical series – which is designed to complement my monthly diary feature – by taking a look at the fake hook baits on the market – and how you use them.
A glance along the shelves in your local tackle shop will reveal a range of plastic baits that encompasses everything from breadflake and sweetcorn right through to Chum Mixers and maggots.
Plastic sweetcorn was probably the first of the imitation baits to really hit the carp scene in a big way, as it was used in the capture of the then British record to Terry Glebioska in the spring of 2002.
But what advantages does it offer the angler? Do you have the confidence to thread a bit of shaped plastic onto your hair in preference to a nice smelly boilie?

Nuisance Fish
One of the main advantages of using imitation bait is its obvious resilience to the attentions of small fish. If you are setting a trap for carp using corn or maggots then you need to be sure that your bait is still attached when Mr Carp comes calling – and that a herd of small roach or perch have not left you fishing with a bare hook!
Plastic hook baits enable you to fish all through the night, safe in the knowledge that a bait remains on your hair.
However, what happens though when you are fishing with the plastic on its own, with no free bait around your rig to act as an attractor? What is it that makes the fish pick up an unscented piece of rubber that offers them no food signals whatsoever?
On many pressured day ticket waters, where carp are very aware of the dangers they face every time they feed, imitation baits can outscore more traditional hook baits. Venues like St John’s and Christchurch lakes, two of the most popular day ticket waters in the country, both contain fish that show a distinct preference for imitation baits over smelly boilies and even particles.

No Smell
I am convinced that the very fact there is no smell coming off of the plastic bait means that there is also no danger signal the carp can pick up on. This means that the plastic bait has to be taken into the carp’s mouth to be tested, so the carp can ascertain whether it’s food or not.
Smelly boilies, which the carp will have been caught on time and again, will raise the fish’s suspicions – and in many circumstances will not even be taken into the mouth. Thus, more fish than ever before are currently being caught on plastic baits (especially from pressured lakes).
I have to ask myself, though, whether the manufacturers of these imitation hook baits are getting it right for the right reasons. For instance, now we are seeing plastic baits that are infused with flavour. Are flavoured imitation baits therefore missing the point and detracting from the actual advantages non-flavoured imitation bait offers?

Plastic Wins!
An interesting scenario arose at a junior fish-in held last summer on St John’s lake, where talented anglers from all over the country gave up their time to pair up with some juniors for 48 hours.
Each angler came to the lake with his own ideas about methods and baits. Some knew the lake and some had never seen it before, yet one thing became clear as the fish-in progressed. Despite all the different input, advice and methods used, the unflavoured plastic corn far out-fished any other bait!
Indeed, by the end of the two days, most anglers had switched over to using it in preference to boilies. Maybe the ‘lack of a food signal in a hook bait’ theory really does have something going for it.
Obviously it is not a method that will go on working indefinitely. The carp need to feed properly at some stage and ’proper’ baits will be eaten as and when the carp feel confident enough to do so.
I’ll keep using boilies. They are a very good bait, but I’ll only use them when I can establish them as a decent ‘food source’ for the fish, a food source they can eat without getting caught by anglers other than me – a situation that will give them confidence in my bait and therefore allow me to catch them more easily than might otherwise be the case. 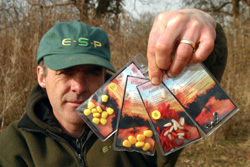 The range of artificial baits now available is vast. There are plenty to choose from. Enterprise Tackle alone produces imitation peanuts, tiger nuts, pellets, casters, maggots, maize, corn, hemp, bloodworm and over 20 size and colour variations of artificial boilies. Partridge Tackle also has a vast range of similar products.
More recently, Partridge and Enterprise have launched imitation bread flake. Early indications show that this also is looking like being a winner. It’s an incredibly versatile product as it can be torn into any size or shape and will retain that shape indefinitely. Bread has always been a very underused bait for carp – they absolutely love the taste of it – but due to its fragile nature it has always had a limited use.
Now things are different. Lee Jackson’s method of liquidising bread and presenting it in small PVA bags is sure to be a winner when combined with the artificial flake on the hook. Possibilities for stalking are also endless.

Floaters
Artificial mixers are another area where the real thing can be less effective than the false ones. Enterprise Tackle makes a false mixer with a counterbalanced weight embedded in one side.
The beauty of these is that the hook can be presented on the top of the bait, out of sight of the carp as he comes up to inspect the bait. The hook will always be at the correct angle to the bait as it can be nicked through the side of the false biscuit. You also never have to worry about your bait taking on water and slowly sinking out of sight!

Presentation
Let’s take a look at some of the many presentations that you can use with your artificial baits. First up, the plastic corn and maize baits that seem to outwit so many carp nowadays.
Remember that natural corn is extremely light in water and can easily be ‘hoovered’ up by the carp. This means that a balanced rig is more likely to be taken confidently than a rig that’s overly heavy with the hook bait pinned firmly to the lake bed. For this reason, a lightweight hook such as a Super Specialist or an ESP Big-T in a size 7 is ideal for one grain of false maize or two grains of false corn.
As a rule of thumb, two pieces of Enterprise fake corn on a hair will make a neutral buoyancy bait, whereas three will create a pop-up.
In the case of the Enterprise false maize, one single grain will perfectly balance a size 6 medium-weight hook. Two grains will hold the rig up so that it needs a counterbalance.
Another advantage of the plastic is that once you have balanced your rig it will not take on water and become any less buoyant or less effective, no matter how long you leave it out there.

Plastic maggots are an excellent invention. They open so many avenues that were unrealistic using fresh bait on the hook. There is just no way, in a mixed fishery, that you could confidently leave real maggots on the hair all night and still expect to have any bait left in the morning.
Now all that has changed as you will always have a hook bait that looks the part at least, even if the roach have eaten all your freebies! It is very easy to top up the supply of loose maggots over your rig using a small spod or bait dropper without having to recast your rig.
Plastic maggots can either be fished on a hair rig or mounted straight onto the shank of a hook, but you must make sure that ‘shank- mounted’ baits cannot spin around and mask the hook point.

Surface Fishing
Floater fishing has always been a bit of a hit and miss affair. Will the bait stay on? Will it sink just a a fish starts to get interested in it? And how do you get a fresh, dry Mixer on the hair in the first place without it snapping in half?
The imitation mixers from Enterprise have eliminated all these problems at a stroke. Simply hook the mixer on (threading the point through the opposite side to the balance weight) and you have an everlasting floater that will sit the correct way up in the surface film and present your hook on the top of the bait.
There are a couple of important points worth mentioning with these baits, as there is a correct way of mounting them.
I have found that a hook with a nice wide gape and a straight point works best. The weight of the hook is also crucial if you want the bait to sit up the right way. A hook that is too heavy or a hook link that is too thick will drag the bait over onto its side and, although it is far from imperative that it sits upright, you will hook more fish if it does.
A lighter hook in a size 8 is ideal. A nice supple, fine hook link such as Drennan Double Strength will improve the presentation, too. If the hook does lay on its side, don’t worry, as it still offers a far better presentation than the usual ‘hair-mounted’ mixer where the hook actually hangs below the bait and is the first thing that the carp encounters when it approaches the mixer.

Berkley PowerBaits
Another option you can try is the Berkley range of PowerBaits and PowerNaturals. Unlike the Enterprise and Partridge plastic baits, Berkley’s PowerBaits aren’t artificial and they aren’t plastic. They’re actually made with real foodstuffs that have been impregnated with a special attractor that has been scientifically proven to catch carp.
Although I haven’t used them I know people who have caught very well on them, including editor Jim Foster. Jim especially recommends the Fish Protein PowerNaturals and the PowerBait corn.
Even though they’re not plastic, the Berkley baits are still incredibly durable and will not suffer from the attentions of nuisance fish or crays. Those of you who regularly fish in France might consider these as a viable hook bait alternative – they’ve caught loads of fish on the Continent.
I like the Powerbait Fish Protein dip that complements the range. Lee Jackson has caught a lot of fish on this, and if it’s good enough for him it’s good enough for anyone!

Although they contain no actual food value whatsoever, and cannot be eaten, false baits can, on the right day, provide a very useful weapon in the carp angler’s armoury.
I would thoroughly recommend keeping a few packets in your tackle box.

1. TIP One
If you’re not confident threading on a plastic bait by itself, try using it with some maize on the hair at the same time.

3. TIP Three
With a heavy hook like this Fox Series 5 version, you can balance a pop-up Partridge tiger nut.

4. TIP Four
If you’re still not happy casting out a single plastic hook bait, try dipping it in some PowerDip for a few minutes before casting.

5. TIP Five
Enterprise fake maggots should be fished on a light mono hook link, with a lightweight hook. Fish over a PVA bag of maggots.

How To Use Fake Surface Baits