A British angler has banked what’s thought to be the first albino wels catfish over 200lb ever landed during a session on Spain’s River Ebro.

Wirral angler Bernie Campbell was on a break with his son Gary with angling holiday firm Catmaster Tours when the 206lb catfish fish picked up his multiple pellet hook bait.
The old world best for an albino catfish is believed to be a 196-pounder banked on the Ebro last year.
The catch is the culmination of a seven-year quest on the Spanish venue for a record breaking fish for Bernie, and AK Angling Centre boss Adam Kettell was there to witness it.
“It was a really special moment to see a catfish of that magnitude on the bank, especially as it was an albino,” said Adam. “I’ll never forget the capture – in fact I’ll be hard pressed to ever be involved in a more memorable day’s fishing.”
Colin Bunn, owner of Catmaster Tours confirmed that although the Ebro is world renowned for its catfish sport, albinos are quite rare with only around ten a year caught on trips he organises on the big river. Clients fishing with Catmaster Tours have landed wels catfish to over 240lb from the venue. 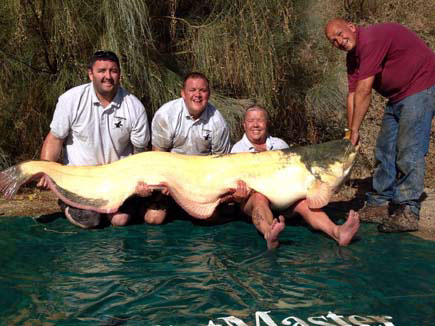