Grand Prix Match Triple X is gaining a fast following in the Midlands not just because it’s very good value for money but because it seems to work brilliantly as well.

know about the chemistry of what gets fish feeding ain’t worth knowing.

Without blinding you with science, it’s all about getting free floating proteins into the water, which trigger the fish into feeding. You can soak your baits in it or even feed it neat. According to Denzil, once the fish are in your swim, they don’t leave.

“Apart from predators coarse fish find food mainly by smell. We went about trying to find out how fish find bloodworm, which are often in the silt in and found that they emit a waste product. Once the fish smell it they know there are bloodworm about and they get their heads down.

The free-floating protein ingredient in the Triple X mimics that smell. Once the fish taste it through their gills they know it’s good for them and go into a feeding frenzy and will grab at any food items you give them. You can use any hook bait with it really although I tend to soak corn in it for half an hour and then fish worm or a small cube of meat over the top.” 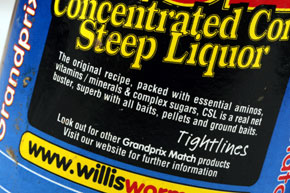 My first test with it went rather well – I won a match using it with 119-8-0, fishing worm shallow. However, Denzil rates another of his products for this kind of fishing.

“When I’m fishing I always use the Super Strength CSL which also has some of the free floating proteins in,” he says.
“The CSL changes the PH of the water – the PH crashes from neutral to about 3 instantly and the fish come to investigate, they can’t help themselves.

“Once they sense the protein traces in it they switch onto feeding and as long as you keep cupping it in you can create a cloud of low PH water which keeps the fish shallow and feeding.”

The key ingredient that creates the free-floating proteins isn’t cheap and Denzil has to import it. However, he’s made a point of keeping the price within the range of everyone at £3.99 for a whole litre, which is excellent value. I do know that there have been other products with this ingredient in the past, but they have always been much more expensive.

Now I can’t promise you I wouldn’t have had 119lb without the Triple X, but I can promise you that the fish certainly weren’t put off by it. It took about half an hour to get the fish going which Denzil says is typical when using the product. But the fish stayed there all day after that and I ended up with a ball of fish swimming around the area where I was cupping in chopped worm, caster and the Triple X. I’m also hearing that it’s gaining a very strong following on the Midlands commercial fishery match circuit with some top names including the likes of Ken Giles swearing by it.

One thing I’m particularly interested in is Denzil’s claims that he’s had lots of success when cupping in no food at all, just the Triple X. This throws up some very interesting possibilities for winter fishing, when you need the fish to feed but can’t afford to feed much.
Click here to purchase