This giant of a halibut weighing 482lb has been landed on rod and line off the Alaskan port or Gustavus at the mouth of Glacier Bay, but the captor won’t be able to claim a world record because a harpoon was used to help land it.

The fish, thought to be the biggest caught in the Pacific Ocean for at least ten years, was landed by 72-year-old Californian angler Jack McGuire who was fishing aboard the 28-ft charter boat the Icy Rose.

Under IGFA rules, no tools other than a net or gaffe can be used to help in the fish landed process. The current IGFA world record for the halibut is a fish of 459lb caught off Dutch Harbor, Alaska in June 1996 by an angler called Jack Tragis when the halibut stocks were very healthy. Stocks have fallen since and anglers in the Southeast part of the state are now restricted to keeping one fish day over 76 inches (up from 68 inches last year) or one fish under 44 inches.

It’s believed the skipper, Rye Phillips who despatched the halibut with a .410 shotgun before using a harpoon to help land it, did so because big halibut have been known to injure anglers and crew once hauled aboard small boats in particular, although Andy Martin of Deep Blue Charters and Alaskan Anglers Inn in Gustavus told reporters that if he’d known it was a potential world record he might have acted differently.

Jack’s fish, which produced about 200 pounds of boneless, skinless fillets, took an octopus bait fished on a circle hook in 130ft of water.

The area has been producing monster halibut in recent years. In July 2011, two halibut estimated at 466lb were landed in both Gustavus and Pelican. Neither port had a scale big enough to weigh fish of that size at the time. Gustavus is a community that can only be reached by boat or airplane from the Alaska state capital of Juneau, about 45 miles to the east. 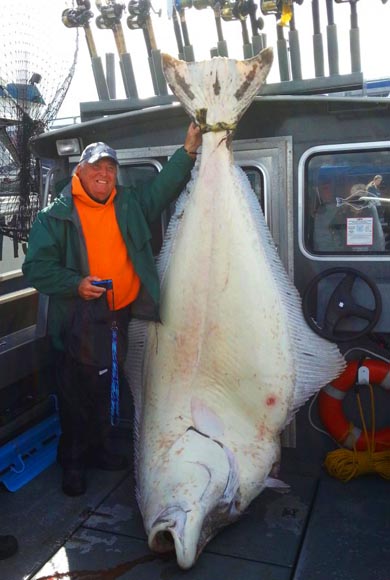