With 24 teams now confirmed to compete at the FIPSed 4th World Feeder Fishing Championships In July it will be the best attended in the event’s short history.

The National Coarse fishing federation of Ireland, the representative body for coarse anglers north and south of the border have taken on the mammoth task of not only securing and hosting the event but working with their partners ESB, Cork County Council, Avondhu Blackwater Partnership Ltd, Inland Fisheries and the Angling Council of Ireland to develop a 2.8km stretch of water to championship standard.   The primary development to provide road access to the venue now in its third phase and due for completion at the end of May has involved cutting through rock to depths of 3 metres at stages and the re-piping of springs and streams.

‘There can be no more fitting place than Ireland to hold a World Feeder Championship and Inniscarra looks to be an inspired choice. If the fishing is as stunning as the location then we can expect a fantastic event for the 4th FIPSed Feeder Championship.   Ireland has always been a mecca for English anglers, myself included, and the feeder has played a major role in many huge catches of bream and roach.  With the access development around the lake complete, then everything looks to be perfect for a great match and I have no doubt that visiting anglers will enjoy their stay in Ireland.

The Inniscarra Reservoir, one of two reservoirs in the Lee Valley in County Cork in the South East of Ireland, resulted from the development of the Lee Hydro-electric scheme in the late 50’s. A water of some 530 hectares it has over 40km that can be fished, like many Irish waters access can be difficult; popular sections such as ‘graveyard’, ‘garden centre’ and ‘Wall’ are regularly used on the Irish Festival scene but with the ability to drive along and park behind your peg you can expect the venue to become very popular indeed.  A year round venue is known for its Bream catches but in latter years quality Roach and Hybrids dominate. 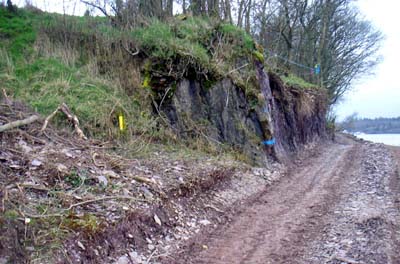 Tommy Lawton, NCFFI International Events Committee says ‘the NCFFI has been supported in this task by the Inniscarra Lake Development Group without whom this project would not be possible. We are delighted that in our partnership we can add world class angling to the Inniscarra Lake Amenity and encourage tourism in this fabulous region of Ireland.

According to FIPSed rules the stretch must be closed for 2 weeks prior to the championships, opening only for practise from the Monday prior to the event which commences on the 19th July. The ILDG however run a series of festivals back to back commencing on the 24th May and finishing with a three day Feeder Only competition on the 1st to 4th June.