The final day on the Lough Muckno July festival saw the closest leaderboard witnessed in years with just grammes separating the top 4 and today’s showdown as expected did not disappoint.

That Kevin Johnson would continue his charge was never in any doubt but could Craig Ellis hold on from the mighty Steve Harwood or could strong man Les Thompson come through to take the honours.

Soon after the all out, the destination of the top spoils were clearly not in doubt with Kevin Johnson registering a massive 16.5 kg off a favoured peg, 204 Yellow Island.

Les Thompson leaving a little too much to do from an indifferent draw and result day 3, held on well, on 10kg plus, to comfortably retain his morning position in 4th.

Chris Simpson on a fine 12kg backed up his series of super weights during the week to move nicely into 5th spot, a massive result in awesome company and he held off a resurgent Tony Hopkins, who also had double figures every day and a truly superb Festival performance.

Spare a thought for Simon Willsmore who threw caution to the wind day 4 on White Island, suffering greatly as he did so, but still came up just 25 grammes short of a podium finish.

Julian Kendrick made great strides late on but his 11kg today, fell just short on this occasion on Concra Lower, a section that saw superb weights today, none better than that of Mark Wainwright who is one of the new revelations on this venue, on a superb 14kg plus.

The trailing field had a generous sprinkling of angling stars with Darren Davies, Neil Mallinson, John Freeborn and Ian Shepherd holding off the top Irish challenger and only one of two, Rory O’ Neill.

Our only other Irish challenger Seamus Winters followed Rory home just three places back and had a fine festival, with some daily section wins and and some nice weights.

Newcomers to thefestival and indeed to Lough Muckno were to say the least, surprised if not in awe of what it has to offer anglers of a good standard willing to graft. Steve Sanders was heard to say at our presentation this evening: “I have fished many places around Europe and around the world and I have never fished a better venue than this.”

Mark Wainwright likewise in a short few words on behalf of the visiting anglers who made up 95% of the field, stated that he’d struggled on this great venue for a few years and he is now beginning to feel that he has it sussed. Mark’s results this week would bear testament to that, when he just got better and better as the Festival went on and he urged anglers to bear with and get to know this challenging venue, which he regards as by far and away the fairest in Ireland.

A host of top anglers like Thompson, Davies, Harwood and Willsmore who are relative newcomers to Lough Muckno all say the same and all have vowed to return for more and to spread the word about what some said was ‘the finest Festival venue they have ever fished’.

Stars beget stars and it is even at this stage known, that a host of other top anglers are committed to this festival for 2018, when we will see an extended list of the best competitors doing battle here some for the first time.

This massively tricky/challenging Lough Muckno venue now gives the decent angler, the up and coming angler and the angler willing to learn from the best, from at home and abroad, an opportunity to mix it in the best company, to learn from the best anglers and while they are at it to share in the best prize funds available anywhere and savour the atmosphere, in truly great angling company. 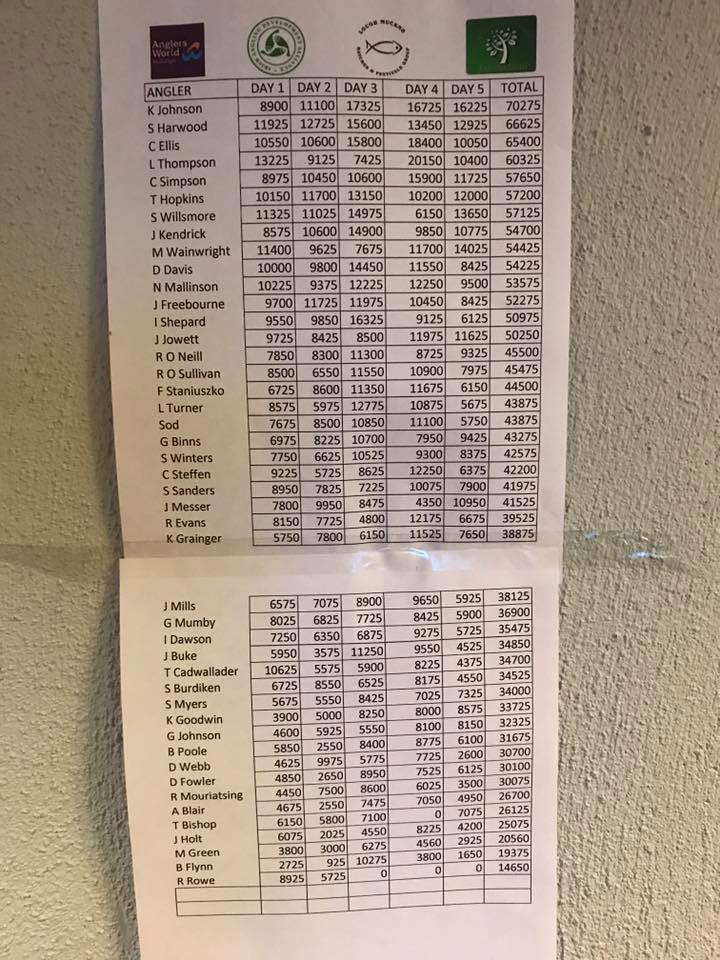