Match organiser Alan Henry (pictured) with the 25lb bag of bream that saw him to second place on Sunday on the Trent.

The new series of matches on the Trent being organized by Total-Fishing.com stalwart Alan Henry is off and running with over 50 anglers turning up for the opening day event at Laughterton and North Clifton.
With plenty of rain about anglers were faced with a flooding and coloured river, and most opted for a feeder approach with caster and chopped worm.
Bream and skimmers were the mainstay with Lincoln Whisby AS anagler Bill White topping the field of 53 on Saturday with 14-0-0 from Peg 54 at Laugherton, one bream plus skimmers.
Sunday’s Vaughan Cup was better, Drennan England’s Julie Abbott topping the pile with bream and skimmers from peg 8 for 28-15-0, just 7oz in front of match organiser Alan Henry who also caught bream and skimmers, this time from peg 56.
Monday’s event again saw Bill White well out in front, this time from peg 8 with 25-9-0 with Alan Henry again second.

Wayne Swinscoe made the frame in Saturday’s opening day match on the Trent at Laughterton and North Clifton with this double figure bag. 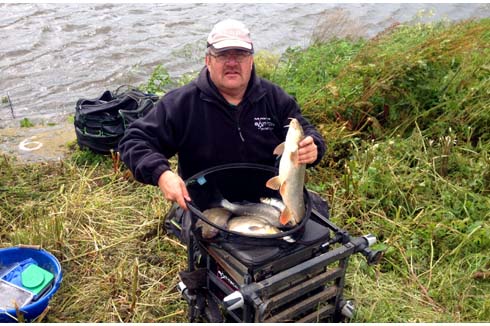