Roger Mortimore’s once-in-a-lifetime angling adventure into Outer Mongolia was crowned with capture of this magnificent taimen estimated at well over 40lb.

Roger, who used to work on Total Sea Fishing magazine, made the 1500km-plus trip, at times travelling on horseback, more in hope than expectation of capturing the elusive creature.

But the angling god’s were smiling on him when he hooked into the 1.3m long creature while light spinning on the Tengis River for grayling some 1600m above sea level.

“It’s a fish I really didn’t think we’d see,” said a delighted Roger while still in Mongolia. “I had fly-fished up and down the river during the day and caught loads of grayling. Our guide Ider also had a fine lenok of 3-4lb.

“The girls had started preparing dinner with potatoes, carrots and onion in the pot on the camp fire when Tookso suggested we catch a couple of fish and make it a fish soup. I thought I’d go for the light gear and have some fun, so out came the 6ft 5-30g telescopic rod and Mtchell Mag pro fixed-spool with 10lb braid and a little 10gr Mepps spinner (all hooks were barbless as always), and 3ft of 11lb fluorocarbon leader.

“I had one decent sized grayling on the bank and returned two small ones. I then hooked another decent sized grayling and was bringing it in very slowly. The current was swinging it towards the near bank and as it got near a deep pool I felt a solid ‘thump’ and line started to peel off the spool. I thought ‘this is a good grayling’. Then the thing took off to the middle of the river at high speed and jumped 3ft clear of the water.

“When I saw the size of it I thought I’d never land it on such light gear, I screamed ‘TAIMEN!!!’ to the other guys and they came running over to help. Ider took some good pictures and video as the fish made several runs down and across the river.

“My heart was pounding and legs shaking a bit but as I ran along the bank I kept a tight line and gradually brought the beast to our bank and after five powerful runs and two jumps and running more than 200 metres from where I first hooked it.

“Hishkay, one of our horsemen, walked into the river and grabbed its tail to secure it. As I lifted the fish for a photo the lure fell out of its mouth – mixture of right place, right time, incredible luck and some bloody good angling skill to land it. I am a very happy man!

“I don’t have much…. a car, some clothes and my fishing gear, my passion for angling and a job that I love,” added the 59-year-old. “I save through the winter and spend in summer. Jeremy Wade eat your heart out!”

Roger’s taimen is a true specimen, although the world record is over twice the weight of the fish he caught – a 92lb 8oz fish caught from Siberia’s Keta River in August 1993 by Yuri Orlov. 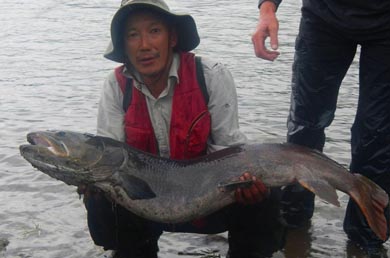 About The Taimen (source IGFA)
There are four species of the genus Hucho, which include the species Hucho hucho, the huchen and Hucho hucho taimen, the taimen. While the two subspecies of Hucho hucho cannot be separated on the basis of morphology or meristics, their geographical separation allows us to distinguish between the two.

The huchen is restricted to the Danube River drainage and the taimen to the Ural Siberian Amur drainages, most of which flow into the Arctic Ocean. Ranges of the huchen and taimen are disjunct (do not overlap) and are separated by the Eastern European Flatland.

The taimen inhabits large rivers with fast currents, often to their estuaries. It also occurs in lakes. In spring, it ascends the rivers and enters shallow creeks, spawning in May.

They probably attain the largest sizes of any salmonid fish. A report exists of a 231 lb specimen taken in a commercial net in 1943, but the largest authenticated record is 123 lb (55.8 kg), slightly less than a commercially caught 126 lb (57.2 kg) Chinook salmon.

Taimen fishing is similar to that of huchen, flies, plugs, large spoons, and spinners are all highly effective, and of coarse, any live bait should be productive. The voracious taimen reportedly will strike at anything resembling wounded prey. Just as large prey are sought by large fish, lure size should match the size of fish sought by the angler, monster fish require monster baits!

While huchen populations have diminished rapidly with over exploitation and habitat deterioration, taimen are just emerging as a popular sportfish. Hopefully, with due care from concerned anglers, the taimen population will not suffer the same fate