Long Eaton Victoria Angling Society’s stretch of the Erewash Canal in Long Eaton received a welcome boost when a new batch of fish was introduced along the Tamworth Road stretch on Friday 28 February.

This was part of the restocking programme facilitated by the Canals & Rivers Trust to help the canal recover from the latest pollution, the fish coming from the South of England.

There was just over 10 lbs of small tench and over 400 lbs of small bream, most fish in the 6 oz. to 12 oz. size range, and all in pristine condition.

The restocking was overseen by an officer of the CRT and LEVAS’s General Secretary David Kent, assisted by Officers of the Society Jim Rudkin, Paul Richardson, Shaun Harrison and John Adamson. 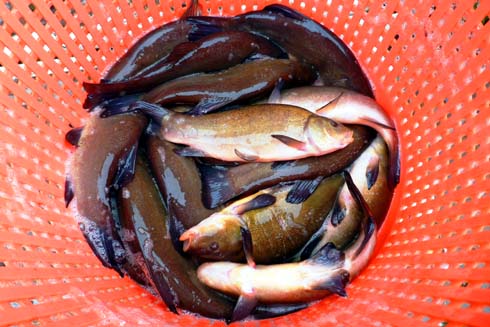 It is expected that these fish will settle very quickly and will boost anglers’ catches over the coming weeks.

It should be noted that the canal had already received stocks of bream (to 4 lb.), roach and rudd (to 8 oz) and perch (to 2 lb), and there is evidence that these new stocks have already successfully spawned as there are small fish throughout the pound.