The Mega Match This event, once again, reaffirmed it’s status amongst the UK angling fraternity as being the Premier event that every angler now wants to win after it was announced during the exclusive Gala evening event the night prior to the final, the 2015 Mega Match This Champion would receive a winner’s cheque for £65,000 – £5,000 more than received by previous Champion, Chris Cameron and nearly doubling the prize fund of the next richest angling event in the country, Fish O Mania!

It was the belief of many during the build up the final the 2015 Grand Final event, like others before it, would be very much a match of two halves with anglers looking to boost the weight achieved during the more difficult first half of the match being off-set against the notoriously productive final ninety minutes.
This year’s final did not buck the trend and produced arguably the most exciting finish to any of the Match This finals to date with any one of six anglers being in with a chance of topping the field with half of the match still remaining. Kerry Kirkwood, Perry Stone, Brian Loader, Match This danger man, Andy Power, Lee Thornton and Frankie Gianoncelli had all caught steadily during the first couple of hours, setting themselves up nicely for a strong finish and giving themselves plenty of opportunity to challenge for the title. A noticebale absence from the list of potential front-runners was Peter Upperton. However, as many who know Larford Lakes well will testify, everything can change during the infamous ‘witching hour’ if the larger carp decide to feed in numbers down the edge late on.
All eyes were fixed on Kerry Kirkwood and Perry Stone, both of whom upped their performance during the final throws of the match. Kerry, who was on permanent peg number 46 was certainly the busier of the two, but Perry found himself amongst a better stamp of fish on Match This peg 17 (permanent peg 50). Peter Upperton had drawn Match This peg number 20 (permanent peg number 56) placing him midway along the burr bank and had struggled for the first half of the match. However, timing his move to his inside to perfection, Pete soon found himself trying to tame a typical Larford edge fish nearing double-figures. Fishing meat in the margins, Peter found a number of good-sized fish to turn his match around and stage a remarkable run of fish which saw him climb the leader board a place or two with nearly every other fish.
Pete’s run of late edge fish continued right until the all out was announced. By the time the scales had made their way round to the burr bank, it was Brian Loader topping the field having offered 29.420kg of method feeder fish to the scales from fancied Match This peg 12 (permanent peg 28). However, once on the burr bank, the scales registered 32.320 kilos for Middy’s Lee Thornton from permanent peg 48 to give him a very short lived lead before Preston’s Frankie Gianoncelli registered 40.760kg from Match This peg 18 (permanent peg 52).
All eyes were now on Peter Upperton, who was the last remaining angler to weigh in on the burr bank that looked likely of finishing in the mainframe. Three separate weighs confirmed a total of 48.920kg, which was enough to confirm his place at the top of the field and enter his name into the history books as the fifth Mega Match This Champion.
Upon being confirmed 2015 Champion in front of an ever-growing crowd gathering on the burr bank, Pete commented: “I can’t believe it! I had only caught three fish with two hours to go. I fed my right hand margin with some meat, left it for five minutes before going over it and had one straight away. I said to my bank runner, Robbie Taylor, that this was it – now’s my chance. The margins fish at Larford are so big I was just happy to catch a few, but I didn’t know if it was going to be enough. I was beginning to run out of bait towards the end of the match so it was a little touch and go!”.
Peter had enjoyed a fantastic run of form going into the Mega Match This Grand final. Just a few weeks before the main event itself, Peter secured the Maver Pairs title with bank runner Rob Taylor before finishing runner-up during this year’s Maver British Pole Championship event. Peter now joins the likes of Andy Power, Les Thompson, Zac Brown and Chris Cameron in being one of a very select niche of anglers that have laid claim to UK match angling’s ultimate prize – the Mega Match This trophy and five-figure pay day.
Peter Upperton caught the majority of his winning catch on meat fished down his right hand margin to take a late run of carp well into double-figures from Match This peg number 20 to end the match with 48.920 kilos.
Preston’s Frankie Gianoncelli secured runner-up spot from Match This peg 18 (permament peg 52) weighing in 40.760 kilos. Again, like many anglers pegged on the burr bank, Frankie endured a slow start to proceedings managing to put together very little with three hours gone. Switching to pole and pellet short at top five, Frankie found a number of good-sized fish to 10lbs to enjoy a very productive thirty five minute spell which saw him record around 18 kilos in four fish! frankie then focused on his right hand edge to find off carp to dead maggots over groundbait. For the remainder of the match, Frankie alternated between both his short line and edge line to finish just 8 kilos shy of Pete’s winning weight to collect £5,000.
Taking the last remaining mainframe position, and receiving £3,000, was Middy’s Lee Thornton. Fishing from permanent peg 48 (Match This peg number 16), Lee started his match short at just 6m on meat. A great start was unfortunately nullified by a quiet three hour period mid-match which saw Lee foul hook two fish on the long pole before switching back to his short 6m line after his margins failed to show any signs of producing bites. Lee enjoyed a strong fourth hour to put a steady run of fish together and end the day offering 32.320kg to the scales.
A big congratulations also goes to this years section winners in Jamie Wilde, Brian Loader, Alix Feeney and Philip Canning. Jamie weighed in a total of 19.340 kilos from

a notoriously difficult area that has yet to produce in a Mega Match This final to confirm a place within the top ten.

Brian Loader managed a superb fourth place finish overall. Brian, who by his own admission was one of the rank outsiders before the final, drew fancied permanent peg 28 (Match This peg number 12) and fished a great match coping with the added pressure of being on an excellent peg admirably. Brian caught the majority of his fish on the method feeder to weigh in 29.420 and collect a cool £1,000.
Also collecting £1,000 after topping his six-man section was young Alix Feeney. Alix, who is the competition’s youngest ever finalist at just twenty years old, weighed in 21.020 kilos from permanent peg 44 (Match This peg 14.
Birmingham-based youngester Philip Canning (23) also confirmed a section win collecting £1,000 from peg 58 (Match This peg 21) weighing in 26.980kg. 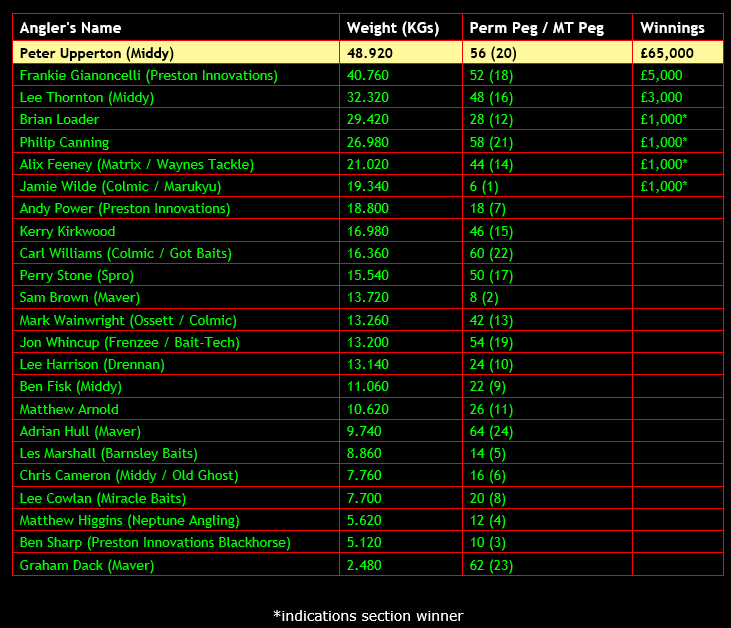