You may not know much about Angling Heritage, and you can be forgiven for that. But it’s a worthy operation exists to preserve written, oral and photographic history of anglers, and anyone can join.

Angling Heritage is a not-for-profit trust, founded in 2009 in memory of Fred J. Taylor, MBE.
The foundation of the Trust followed a recording of a conversation between Fred J. and Fred Buller (later awarded an MBE). That recording was later produced as the first in the ‘Recollections’ series of books and CDs, published by River Reads.

Richly illustrated with photographs provided by the two Freds, and original drawings commissioned from the artist, Ted Andrews, the book and CDs of the dialogue sold out before publication, and each new book in the series has followed suit.

The net proceeds from such collaborations are donated by River Reads to Angling Heritage to fund further recordings, and the purpose of the trust is to preserve written, oral and photographic history of anglers from all walks of life. Fred Buller is the Patron, and the trustees are Sandra Armishaw (Founder), Chris Yates, Des Taylor and Reg Talbot (Secretary and Treasurer). Keith Armishaw is the archivist and has worked tirelessly to locate and preserve this unique history on the dedicated website: www.anglingheritage.org . 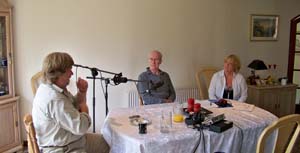 As previous attempts to establish an angling museum had failed, Sandra decided to make a start on preserving angling history in a way which did not require huge amounts of money and so the quest for old photographs, videos, recording and articles began.

From that modest start, the Trust has developed into a fascinating archive which is open to all and the recordings continue. ‘Recollections II’ was Barrie Rickards and Des Taylor; ‘Recollections III’ was Len Arbery and Bob Buteux and currently in the pipeline are recordings between the late John Goddard with Brian Clarke, and Dave Steuart with Bob Church.

In addition to the excellent work carried out by Keith Armishaw as Archivist, Dr. Phill Williams has contributed significantly. As the Trust’s “Roving Recorder”, he has interviewed the great and the good of the sport and added his sea angling expertise. Last, but not least, is Ed Whitby, who brings his youth and enthusiasm to the Trust by managing the Angling Heritage Facebook page, constantly updating it as things progress.

The website www.anglingheritage.org now has over 200 video clips, even more interviews, and a growing array of photographs and has grown to be one of the largest archives on angling. Access is available to everyone for a nominal fee of 1p per token to see a photograph, approximately 15 tokens for audio tracks and around 50 tokens for a film viewing. Tokens are available at £5 for 500 tokens. 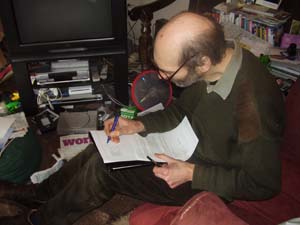 You can see footage of Richard Walker’s record carp, ‘Clarissa’ and listen to Chris Yates talking about his book ‘Nightwalk’ at a fund-raising book- signing for the Trust.  In addition, there is a range of films on many aspects of the sport and the characters who have been such an important part of angling history.

The audio recordings range from sea fishing skippers, to fishery scientists, especially those working on conservation, and even old recordings of the Gerry Savage radio shows which was the first significant radio show dedicated to the sport.

However, to continue to grow, the Trust needs support from the sport too.  We need access to old photographs, recordings (audio or old videos) which we can borrow and scan to digitise the information to add to the archive. We would also like any historical data or articles that you may wish to write about the sport which, subject to editorial overview, we can publish on the site.

To preserve material for posterity, the Trust doesn’t need to keep items on loan, just to borrow them, record the content and return them to the owner, which an acknowledgement of the contribution to Angling Heritage. The trustees have found that many people discard items thinking they are of little interest now, but ‘today is tomorrow’s history’ and in a 100 or more years’ time, may well be even more significant in terms of social history. 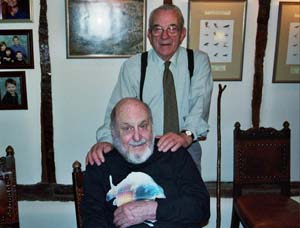 The message is loud and clear – don’t throw angling related items away, contact the Trust and let Angling Heritage preserve them. If you want to discuss the work of the Trust, ring  Sandy or Keith on 01805 625888 and be aware that  the Trust is not only interested in the iconic angling figures, but anyone with an interesting story to tell, whether they are river owners, keepers, netsmen, anglers, or poachers, or you may have information about your angling club.

They are after all, the heart and soul of the sport and have been so for many years.  When added to the online archive, all of this information provides a more complete history of the sport and preserves it for future generations of anglers and those with a keen interest in fishing.

During the short time the Trust has been established, it has accumulated items of hardware donated, and has an agreement with Torrington Museum to have a section devoted to the Trust when its new buildings are completed.  This will form a comprehensive and accessible angling museum and will fulfil the aims of the trustees who believe that donations in whatever form MUST be made available to the public for both research and interest.

We need your help!

You can become a friend of Angling Heritage by joining the membership scheme on line. For an annual fee of £25 you can have unlimited free access to the data on the site, and enamelled badge, and an annual magazine together with preferential access to Angling Heritage special events such as book-signings with our trustees. Just visit www.anglingheritage.org .