Angling website Total-Fishing.com has posted its second highest ever set of traffic figures, recording over 58,000 monthly unique users in the month of June 2014.

Industry standard statistics from Google Analytics show that 58,605 unique visitors visited the website between May 31st and June 30th 2014 – less than 2,000 off the best ever figures posted in 2012.

The numbers show the buoyancy of the online market in the freshwater angling arena, and the success of Total-Fishing.com in morphing from a site once dominated by forum users, to one where strong editorial content including angling news, fishery form, match results and fishing tackle reviews account for a large percentage of the traffic.  Users generated over 215,000 page views in the period, with 77% coming from the UK and the USA accounting for 13% of sessions.

The latest figures also shed light on the changing behaviour of web users in the angling marketplace. Of the 92,852 sessions in this period, well over half (50,073) came from mobile devices like tablets and mobile phones. Apple devices dominate these figures, with 15,835 coming on iPhones and 14,360 from iPads.

“Mondays are the busiest days on the site, when anglers chat about what they did at the weekend,” said Total-Fishing.com’s Gareth Purnell. “But among mobile users Sunday is the busiest day, showing that anglers are actively engaging with the site while they are actually fishing.” 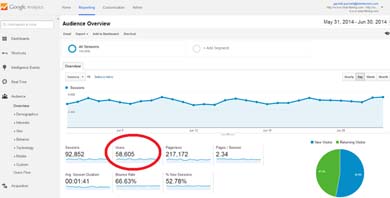