The 2012 Barston Masters Series run through Total-Fishing.com came to its climax on Saturday, September 8th as 80 finalists headed for the Solihull complex on a day of blazing sunshine.

Under the stewardship of Lee Taylor, the event was able to secure the backing of several sponsors, including Hardy Greys and Bagem Match, with support from Mick Wilkinson Floats, Halkon Hunt , Hillbilly Floats , Kobra Feeders and DS Floats.

Anglers were well aware that the venue record had recently been beaten by Total-Fishing stalwart Gaz Woods with a 188lb bag on a day that produced four more ton-up weights, but that was under cloudy skies and weights were inevitably lower.

Winner Simon Allen (Maver Midlands Gold /Bagem Matchbaits) set about peg 23 with a Method feeder approach, catching well throughout the day for his 75lb bag of F1s, carp and skimmers.

He picked up the top prize of £1000 worth of rods, luggage and tackle from Greys Prodigy and £100 worth of Bait from Bagem Matchbaits.

Pemb Wighting (Maver, Bagem Matchbaits) opted for the Method as well, bringing home second spot with 65lb of mainly skimmers and some carp, while Andy Morrison off peg 70 produced the best pole-caught weight of 58lb for third.

Said Lee: “I’d like to thank all those that took part through a very successful series of matches. The dates will be announced soon for next year’s Barston Masters.” 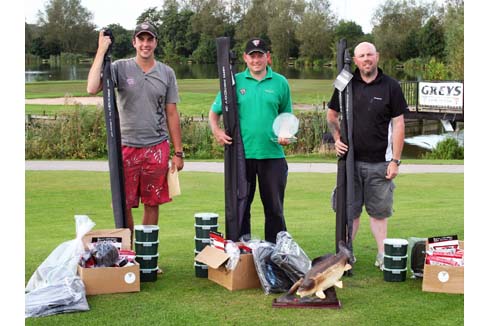