Gareth Purnell sets about proving that tare fishing is easier than many anglers believe and that stillwater roach can’t get enough of the stuff!

HEMP and tares go together like strawberries and cream, or April and showers, yet it’s a mystery to me why I see so few anglers fishing with this deadly combination.

I tend to conclude that anglers think there must be some kind of magic secret to the technique. In fact, it’s one of the easier methods and one that can quickly give you a great deal of confidence.

It’s also much easier to hook tares than hemp. There is no messing about with squeezing shells around the bend of the hook or using a knot picker, as detailed earlier in this guide. Don’t get me wrong, these are both good methods for hooking hemp and there are times when hemp will catch you fish and tares won’t. However, if you can get fish taking the tare, everything is much quicker and smoother because the texture allows you to side hook them and turn them around onto the bend of the hook.

Nine times out of 10 the tare will come off when you are playing a fish, but it’s simple to put on another hook bait.

What’s more, the days when you needed to get your own supply of the seeds and cook them yourself are gone. Dynamite Baits’ Frenzied Tares are ready prepared and perfect for the hook. To be honest, I wouldn’t look anywhere else.

Tares are primarily a roach bait. Of course, other species can and do take them, but where there are a lot of roach about, and you want to target them, they are a brilliant bait, especially during the warmer months.

Because they are larger than hemp seeds they are also selective. If you are on a venue such as a canal or drain, with loads of 1oz roach about, a tare should be able to sort out the bigger stamp of roach, if they are there, better than hemp will.

I like to do most of my hemp and tare fishing on the pole because of the accuracy and presentation advantages it gives you.

However, if you use the correct kind of float and shotting pattern, which I detail in this guide, you can catch on the waggler too. If the fish are out of pole range, or the water is very clear and the fish are spooking away from the silhouette of the pole above their heads, the waggler can give you clear advantages.

To demonstrate hemp and tare fishing I’ve come to a stillwater that is typical of hundreds of waters around the country.

The water holds a good head of roach, including some big ones pushing the 1lb mark, but it also holds bigger fish such as carp and chub, which are quite likely to bully the roach out if I don’t feed correctly.

Because of this, I can’t fish too light in terms of what line I use. At some stage I’m almost certain to hook the odd carp and chub, even on tares.
Were I fishing a canal or drain I would certainly fish very light lines with hooklengths as fine as 0.07mm and even 0.06mm during winter. This would give me the best presentation. These would be matched with very light elastics – probably a No4 or No3.

Here though, I daren’t fish any lighter than 0.10mm straight through. This also means that I can fish a heavier elastic and I’m happy to use a Daiwa blue Hydrolastic. This set-up gives me the advantage of being able to swing fish up to about 4oz should I get the fish going.

Hook choice is important with both hemp and tare fishing. You need to choose one with a wide gape that will allow you to easily turn the bait around to the back of the bend. It’s vital that the hook point is clear of the bait with this technique.

For years I’ve used size 18 Kamasan B511 hooks for most of my hemp fishing and size 16 for tares. I now also use the Green Gamas from Daiwa in the same sizes and these are available in barbless versions, so are perfect for commercials. They are generally not going to hold up to the fight of 5lb-plus carp, but remember that we’re targeting roach; probably the most tackle-shy coarse fish in our waters. 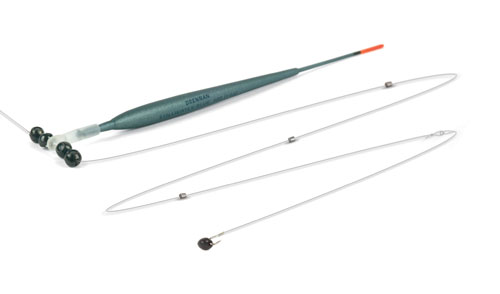 You’ll see from the diagrams that shotting patterns for my hemp rigs are delicate. This is important because I’m expecting to catch fish as the seed falls through the water, as well as just on and off the bottom. Using lots of small shot and moving them accordingly will allow me to vary the way the bait falls through the water as I see fit.

I’ve plumbed up and found that at about four metres I’ve reached the bottom of the shelf where there’s around four feet of water – this is typical of many commercial fisheries.

I’m going to come back a couple of inches so that I’m fishing just up the slope. This is something I’ve learnt from the French match anglers, who are the masters of fishing for roach. Roach don’t tip tail up to feed like perhaps a bream would. They prefer to remain horizontal and dart around for feed. This is why the French prefer to fish an inch or so off the bottom when roach fishing.

During this session I’m looking to fish tares on the hook. The weight of the tare bait is enough to sink the light floats that I recommend using with this method. I’m setting it so that the bait is only just on the bottom and I’m going to hold it there just up the slope.

I’m kicking things off with half a cup of cooked hemp, plus a smattering of Frenzied Tares to give the fish a taster. As far as I’m aware, no-one ever fishes for the roach in here with tares, so it will be interesting to see if they take time to suss the bait out, or even if they like it at all.

I’m swinging the rig out away from me and then letting it settle on a tight line. This slows the fall of the bait and often results in bites just before it reaches the bottom. It’s much, much more effective than lowering the bait straight down.

Straightaway I’m getting little dabs on the float tip, but these have to be left alone. I’m waiting for a nice, slow, positive bite that sees the float tip disappear from view and keep going. For that reason I don’t dot the float tip right down when hemp and tare fishing. Instead, I leave around an inch showing above the surface, to stop me striking at false bites.

Before long, the float tip sails invitingly away and a firm upwards strike sees a few inches of elastic stretch from the pole tip. I unship the No4 section and swing a pleasant 2oz roach to hand on my top three kit. Well, these roach certainly like the tares – they know what’s good for them!

Confident that I’m going to catch a few, I can now start feeding hemp by hand. The important thing is not to feed too much. This will see the carp and chub arriving to investigate. These are both much more aggressive fish than roach and will bully them out of the swim.

I’m right handed and hold the top three in my right hand, feeding a pinch of perhaps 15 grains at a time with an underarm flick of my left hand. The feed goes in first and then I lay the rig out on top of it so that the hook bait is falling with the loose feed.

Within 10 minutes of starting to feed like this I am getting a bite every single put-in. The most difficult part is striking too soon and missing the fish. More often than not the hook bait comes off and I have to come in again and rebait.

For the first hour I’m getting fish in the 2oz to 4oz bracket. Then, on the hour, I get my first ‘stamp’ fish of around 8oz. On the next put-in a slow bite results in even more elastic shooting from the pole tip. I’m not sure what this fish is. It has a very dark, almost black, back and very pointed tail like a bream, but it’s certainly not fighting like one. A minute or so later a lovely roach/bream hybrid of around 1lb 8oz is nestling in the landing net. Or is it a roach/chub? Whatever it is, it’s a lovely fish and I go on to add another of these later on.

As the session progresses I continue to get bites every single put-in. The tares aren’t really sorting out the bigger fish, as the 3oz roach that are dominating are more than happy to take them. I do, however, manage to fool two lovely roach around the 1lb mark before calling it a day. I have hooked two lumps, one resulting in a 2lb chub and the other unseen beast bottoming out the elastic before the hook pulls (carp!).

For good measure, I try the waggler for a while a little further out. I cast out with an underarm swing, rather than an overhead punch, to make sure that the softish tares stay on the hook. This produces fewer bites, but one of them is the best roach of the day at around 1lb 3oz. Maybe the bigger roach aren’t too happy to come really close in here?

There is nothing complicated about fishing tares. In fact, it’s very straightforward and a brilliant way to specifically target my favourite fish – the roach.

tcf Top Tip (0053)
If you are targeting roach on stocked stillwaters holding big fish, don’t feed too much or the big fish will muscle in and push the roach out of the swim. A pinch of hemp fed underarm every put-in is all you need.

How To Hook A Tare