Age: Thought to reach around 14 years.

Feeding: Most active from May-September. Often best targeted just after dawn and at dusk. Goes into a form of hibernation soon after first frosts, burying itself in mud or silt if possible.

Hybridisation: The tench is part of the carp family but there are no reports of hybrids with other species in Britain.

Spawning: Spawns May-August. Females lay up to 400,000 eggs coated in a sticky protective covering. Spawns in dense weed in shallow water, where there is low or no flow 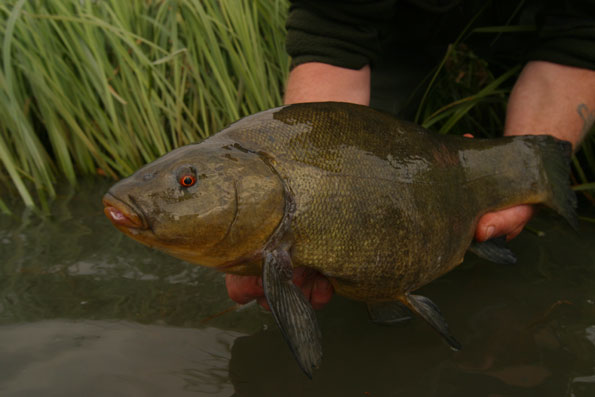 Colouration
Brown or green colour with light or orangy/bronzy underside. Very small pearly scales covered with protective slime giving the impression it has no scales. Very smooth to the touch. Some say the slime has healing properties, but more likely it protects the fish.

Tail
A thick tail wrist and slightly concave, large, compact and paddle-shaped tail gives the tench the ability to make powerful and sustained lunges if hooked.

Eyes
Not that you could mistake them for anything else, but the tench is noted for its distinctive red eyes.

Dorsal Fin
When standing proud, the dorsal fin is high and arch-shaped. It has three or four thick, hard rays plus a number of softer ones.

Pelvic Fins
The pelvic fins are a giveaway as to the sex of the tench. The male fish has much larger, spoon shaped fins with a thick outer ray and pronounced knuckle above the root. Females have longer, more pointed, almost triangular pelvic fins.

Mouth
The tench has a rubbery, downslung mouth with a bigger upper lip that helps with sifting out food from silty or gravel bottoms. In each corner of the mouth there is a small barbel.

Breeding
Life for a tench usually starts in June as adult males and females thrash their way through water weeds, leaving thousands of eggs, each a little bigger than a pinhead, stuck to the weeds. A female of 3lb might lay 200,000 eggs, which hatch in a few days to produce tiny, eel-like fish each about the size of a human eye-lash.

Early Days
For these minute creatures, survival is really tough: they have quickly to find microscopic, living food (like water fleas, Daphnia) and avoid being food themselves for all sorts of other fish (even their own bigger brothers and sisters!). Usually, very few survive, one of the reasons why baby tench are a rarity in coarse fisheries. Those that do manage to stay alive keep themselves hidden amongst weed, feeding on ever-larger water bugs – they especially love snails, freshwater shrimps and water hog lice.

Survivers
When coarse fish farmers or fishery managers drain ponds with tench in them, they need to keep an eye out for the baby tench wriggling out of the weed and mud even days after the water has gone! Tench are one of those very tough fish species that can survive very low oxygen levels and can live kept just damp for a surprising amount of time. This tolerance to low oxygen levels might help explain why tench fishing can often be good early in the morning, when the oxygen levels in a lake tend to be at their lowest and fish shouldn’t really be feeding hard!.

Growing Pains
The growth rate of tench is slow. A one-year-old fish might be only two inches long, a two-year-old fish four inches and a three-year-old six inches long.
A two-pounder could be as old as eight years! Compare that to carp – which can be well over 20lb in eight years. This is part of the reason why tench are so expensive to buy – if you want to buy a 5lb tench for your lake, expect to pay £40 per fish!

Long Life
Such a fish could be a good investment – they are a very tough species and live a long time, maybe longer than 15 years. But tench generally don’t compete strongly with other bottom feeders like carp that feed more aggressively and take the lion’s share of available grub. That said, tench around the country are getting bigger, perhaps the result of protein-rich carp anglers’ baits.

Specimen Sizes
In 1976, a pair of big five pounders would have made the weeklies; but, by today’s standards, who cares? Now, a pair of ‘sevens’ might be worth a few lines. As Britain continues to get warmer, expect tench to carry on growing, because they love warm water, explaining why they are one of the classic summer stillwater target species for anglers. The current British record stands at an incredible 15lb, caught from a gravel pit in 2001. A fish of over 18lb was claimed in 1988 but this was not certified by the record fish committee.

It’s A Sex Thing
When you next catch a tench, try to spot if it’s a male or female. Look at the fins in the middle of the belly (the pelvic fins), which are large and spoon-shaped in the males and smaller and tidier in the females. Big males will also have a lump on each flank just above these fins. It’s said that you can double the size of the biggest male in a water to work out how big the largest female will be. Any 5lb plus male is a very good fish. All double figure tench, which are real rarities, are females.

Golden Years
You might also come across golden tench, increasingly widespread in recent years. These are the same species as the normal, green fish, but are simply coloured ‘freaks’, bred by fish farmers. A big ‘goldie’ is a truly spectacular fish in any fishery but they don’t survive well in the wild as babies, since they are spot-ball for fish-eating predators like herons, pike and cormorants.

Doctor Fish?
Legends call tench the doctor fish, because it was claimed that other fish rubbed themselves against the slimy tench to heal their wounds; people also used tench slime and bones to try to heal all manner of ills. Probably, however, the slime is the tench’s own defence, helping to keep out disease and keeping the fish ‘waterproof’. You never know though – next time you cover yourself in tench slime, you could be doing yourself a power of good!