On Saturday 27th September Coors Angling Club held their annual charity match on five sections of the River Trent at Burton.  The event was well attended and raised a total of £525.00 for the charity.

The sections used were Baileys Meadow, Municipal, Broadholme Island and Sherratts Farm.  There were 65 entrants with 32 anglers weighing in double figures.

Conditions on the day started off misty but later turned into a very nice sunny day with very little wind.  The river was running at normal level with some colour after the recent floods.

The event was sponsored by Shakespeare Fishing Tackle, Coors Brewery and many local companies and individuals who all donated prizes for the event.

First was Rob Johnson from Van Den Eynde, he drew peg 8 on Broadholme Island and fished the pole at 13 metres.  Rob balled in ground bait and loose fed maggots and caster for an all roach winning weight of 27lb 8oz.

Second was Rob Perking from the Daiwa Trentmen Club.  Rob drew in the middle of Sherratts and again fished the pole at 13 metres.  Rob also balled in the ground bait and loose fed maggots and caster, he also had an all roach catch totalling 26lb 8oz.

Placed third was Wayne Swinscoe of Trabucco. Wayne drew peg 23 at the end of the spinney in Baileys meadow he fished 11metres on the pole, after balling in ground bait he used caster on the hook for another all roach net of 23lb 6oz.

Fourth was Ritchie Reynolds from Leicester Sensas.  Ritchie drew peg 20, recently cut out at the upstream boundary of Andressey, pole fishing hemp and tares he had yet another all roach catch of 21lb 10oz.

Fifth place went to Pete Wheatcroft from the Coton Club.  Pete drew peg 32 on Sheratts farm and used the waggler and maggot to finish with a chub and roach catch of 19lb 12oz.

Included in this catch was a specimen chub of 5lb.

Coors A.C. will be holding their Christmas charity match on Sunday 21st December . Other open matches will be run throughout the rest of the season, please contact the Club Secretary on 01283 521711 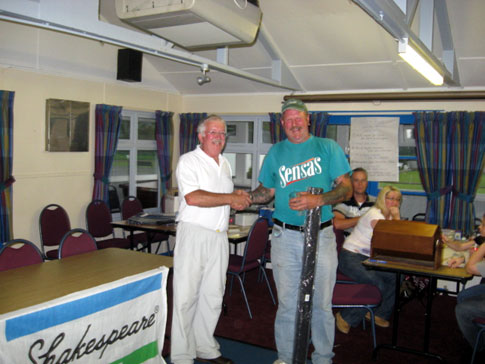