The final day of the 2009 White Acres Garbolino Spring Classic had arrived and on the last day of the festival it was back on site to Twin Oaks for the final match.

The anglers went back into the second section rotation for the match that saw some of the front-runners pegged on the same lake. We were finally given a break with the weather and the conditions were a lot better today.

Today’s overall match winner and picking up his section was Mark Murdoch, Mark was on peg 6 and put in a great effort fishing the method with micros for a top weight of 173lb 9oz. Harry Billing picked up 8 points with his weight of 146lb 15oz, Harry was on peg 10 and caught on the method with pellet.

That was the final day of the festival and here is how the final results look.

With 35 points out of the maximum 36 Harry Billing is crowned as the first ever White Acres Garbolino Spring Classic champion.
The presentation was done in the Anglers Arms early evening and there was a great atmosphere amongst the anglers that fished. Harry lead the pack from day one and extended his lead throughout the week but the race for the remaining positions was exciting and ever changing over the four days.

We would really like to thank the anglers for supporting this event and although we were a little disappointed with the turn out we couldn’t have asked for a nicer bunch of chaps that has really made this festival enjoyable for us.

Thank you also to Darren Cox & Garbolino for sponsoring the event, Garbolino provided rods for the top five anglers with 1st, 2nd & 3rd getting a 12ft Mayhem Speed Carp Waggler and 4th & 5th getting a 12ft Squad Pellet Combo. Once again thanks to all and I know some of the anglers have already booked for next year.

After a day’s break in the festival it was back to Trewaters for the anglers, they were fishing today in the original sections that they had drawn in on Monday which could shake things round a bit. It was a much brighter and calmer day and these conditions reflected in the weights with a general increase across both of the lakes.

Today’s lake winner and picking up this third straight festival win was Harry Billing, Harry was on peg 36 and caught on the pole short down the edge for an impressive weight of 78lb 7oz. Mark Murdoch was second on the lake and picked up his section win with 54lb 1oz, Mark was on peg 46 and caught with paste at 5 meters on the pole.

Third on the lake and picking up 8 points for his efforts was Kevin Howard, Kevin caught on the pole at 6 meters with worm from peg 29 for a weight of 49lb 6oz. Dave Ellis was on peg 34 and was fourth with 44lb 10oz, Dave caught at 5 meters on the pole with 6 mil pellets over micros. Calvin Lawson was on peg 38 and had the next best weight in his section to pick up 8 points, Calvin caught on pellet at 6 meters for a weight of 41lb 14oz.

Now as we go into the final day of the festival here is a last look at the top ten before we announce the 2009 champion.

After a day of mixed fortunes Harry has stretched out his lead, it is still a tight pack that is chasing him but is anyone able to do enough to catch him?

The added bonus on this festival is that there is no dropped result giving the anglers a glimmer of hope in the chance to clinch the victory.

Harry’s certainly had his drawing arm on this week and is fishing the final day of the festival on one of the complexes most prolific waters – the low numbers of Twin Oaks. It is back into the sections fished on day two for the final day which means some of the front runners are all in the same section, I wonder how this will affect our overall top ten. Come back tomorrow for the final results of the White Acres Garbolino Spring Classic Festival 2009.

After a good start to the festival it was on to Twin Oaks for day two. Once again it was a random draw for the anglers so if they drew the low numbers today they would fish the high numbers on Friday and vice versa, we have done the two random draws on this festival just to give it an added chance and to give everyone a fair shot at the title. It was a damp and overcast day but at least the wind had calmed down a bit giving the anglers a break from the battering they had received the day before.

Both sides of Twin Oaks fished well and although the winning weight came from the low numbers the back lake had the more consistent high weights.

The overall lake winner today and picking up a section win was Alan Hodgeon on peg 16, Alan fished on the waggler & method feeder both with pellet for a weight of 151lb 10oz. The other section winner and the next best overall weight was Harry Billing on peg 35, Harry weighed in with 130lb 6oz caught on the method with pellet.

That is the action from day two and here is how the top ten currently looks.

So festival veteran Harry Billing has cemented his place in the lead with another straight section win, the points of the top four anglers are very close and the weights good, with all results counting the anglers know they cannot afford any mistakes. It is back to Trewaters for day three, can anyone topple Harry? Come back tomorrow for the latest results.

This is a new event on the White Acres Festival calendar and even though we have not got as many entrants as we would have hoped for there are still 18 anglers ready for the festival to begin.

The festival is being fished over 4 days on Twin Oaks & Trewaters, there will be a random draw on Monday on Trewaters and Tuesday on Twin Oaks and then on Thursday & Friday they will fish the opposite sections to those that they fished when they were on the lake before. The anglers will fish in 2 sections of 9 working on points with 9 points for a win, all four results count and if tied it will go to weight.

We have called it the ‘spring’ festival although it could be mistaken for the monsoon season here in Cornwall, it hasn’t really stopped raining much over the weekend and a lot of cold water has gone into the lakes which isn’t going to benefit the lakes in anyway but the rain is due to ease up mid-week so we should have some good results.

It was off to Trewaters for the first day of the festival, it was a random draw with the anglers not knowing whom they were going to fish against. With the draw over it was off to the lake, it was a wet and blustery day and although presentation was a problem for some they still forged ahead fishing on the long pole.

Harry Billing was the overall winner on day one picking up his section win with 52lb 4oz, Harry was on peg 46 and caught at 13 meters with soft expanders over micros. Second overall and also winning his section was Calvin Lawson, Calvin was on peg 27 and caught down the edge on the pole at 6 meters with pellet for a weight of 50lb 6oz.

Third overall was Colin Mercer with a weight of 35lb 2oz, Colin caught on the pole at 11 meters with worm from peg 23. Fourth overall on peg 40 was Alan Hodgeon, Alan caught on the method feeder with micros for a weight of 33lb 3oz. The next best weight was 32lb 10oz and this came from Ian Andrews on peg 21, Ian caught long down the bank at 11 meters on the pole with chopped worm and caster.

So that was day one of the festival and here is how our first top ten for the week looks. 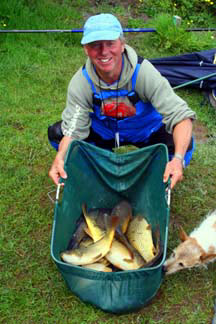