Big news from the north east English coast is the capture of this 71lb halibut off the port of Whitby.

Alan Machen was fishing five miles offshore using a 4.5in Sidewinder lure. While not big for a halibut (a 427-pounder was caught in Northern Norway last week) it’s a notable catch in UK waters, where it’s rare to catch them on rod and line.

Dave Barham, who presents Fishing TV’s ‘Boat Fishing With Barham’ series, said: “They catch two or three every year by accident out of Whitby. In fact there are a lot caught on the long lines this time of year.

“We’ve been up there to try for them properly with Boat Fishing Monthly, but were beaten by the weather. If anglers actually tried for them more they would catch them for sure.” 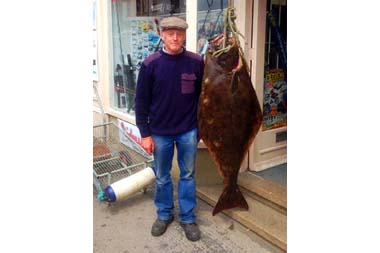