The first weekend match of the new river season at Evesham attracted 50 anglers and for most it was a struggle on a low and clear Warwickshire Avon. Heavy boat traffic throughout the five hours didn’t help matters.
One man who wasn’t moaning about the conditions at the end was match winner Nick Young who booked his place in the final by courtesy of an 11-1-0 barbel and a 5-5-0 tench from Peg 48 on the White House bend.
MAP/Leeda backed Nick took the tench on a groundbait feeder packed with chopped worm and caster, fished tight to the far bank then added to the big barbel in the last hour on a 13m pole with a flat float and worm hookbait.
Second place fell to Daiwa Dorking team man Dave Harpin who continued his good record on the venue with 8-5-0 of pole and worm caught bream and skimmers from Peg 67.
Third spot fell to last year’s Shakespeare Champion Rob South with 6-2-8 of small fish caught on pole and pinkie from Peg 2.
Fourth was Oxford visitor Robin Cave with 6-1-0 of small chub and perch on feeder at Peg 31 and fifth was Jim Brockie with 5-14-0 of pole caught skimmers and eels from Peg 64.
Result
1. Nick Young (MAP/ Leeda) 18-7-0 (peg 48)
2. Dave Harpin (Daiwa Dorking) 8-5-0 (peg 67)
3. Rob South (Bait Box) 6-2-8 (peg 2)
4. Robin Cave (Fox Match Isis Oxford) 6-1-0 (peg 31)
5. Jim Brockie (Alcester Sports) 5-14-0 (peg 64) 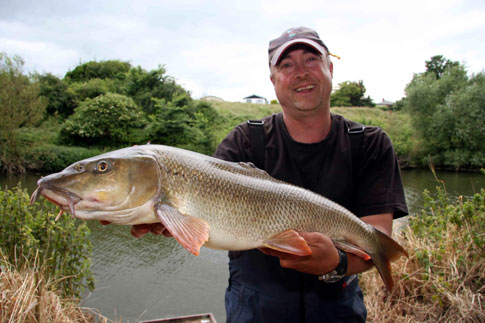