Christian was trolling a sharp drop-off when the fearsome predator grabbed his Musky lure before putting up a TWO HOUR fight.

The existing IGFA all tackle world record for the great barracuda stands at 85lb, a fish also caught off Christmas Island by John Helfrich in April 1992.

However, a 102lb brute was caught on the Rio Qwanza in Angola in April 2013 and we are waiting to find out if this will be accepted by the IGFA. 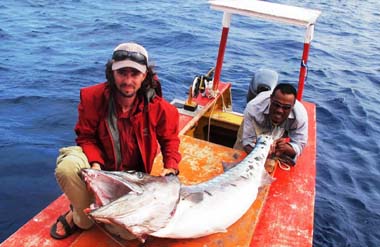