Weight: Younger fish of up to 2lb are silver in colour and are commonly known as skimmers, but once they mature they take on the familiar brown colouring. Fish between 5lb and 8lb from both stillwaters and rivers is seen as a good catch with low double-figure fish a bonus. Bream to nearly 20lb have been taken from big gravel pits, but mostly at night on boilie baits meant for carp.

British Record: 19lb 10oz from Ferry Lagoon in Cambridgeshire in May 2005 to James Rust. Wow!

Length: On average fish grow to a length between 40cm and 50cm. However on rare occasions fish of over 80cm turn up.

Age: Fish that live in large gravel pits have been known to live for up to 20 years.

Preferred habitat: A shoal fish, bream were originally found in slow-flowing rivers, canals, lowland lakes and ponds where the water is rich with nutrients. However, with the development of gravel pits and commercial fisheries they are found in a diversity of venues with clay, muddy bottoms. 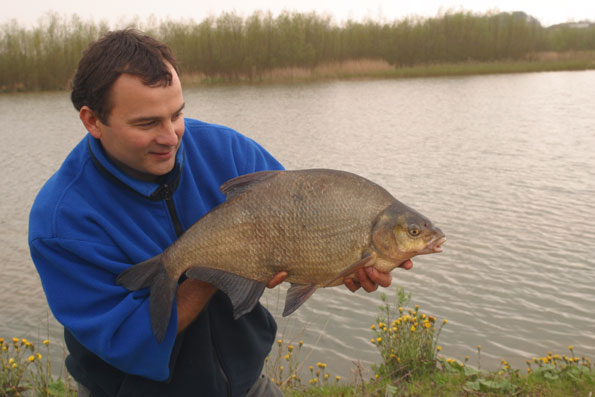 Common Bream
The common (or bronze) bream is a prolific fish, which lives in high numbers in the lower reaches of slow-flowing rivers, lowland lakes and reservoirs. It is a widespread species and can be found right across Europe, even occurring in some estuarine and brackish environments.

Colouration
The common bream has a high backed, laterally flattened body. Its colour varies depending upon age and water clarity. It has a dark back and in clear water a bream usually has bronze or golden brown sides, whereas in coloured water they tend to have more of a grey tinge. The fin colouration also varies with age. Some large fish can develop a two-tone appearance, with the one half dark or golden brown and the other half light brown.

Spawning Time
The common bream reaches maturity between 3–5 years depending upon the availability of food and water temperatures. The mature fish choose to spawn between May and July. They are communal spawners and at this time they may be seen congregating in huge shoals in preparation for breeding. At breeding time the male fish have conspicuous spawning tubercles covering their head and body, the fish looking as if they have been rolled in salt granules! These actually play an important part in the spawning process as they help to stimulate the female during the breeding ritual!

Doing It In The Dark
Common bream generally spawn through the hours of darkness, laying their sticky eggs on aquatic weeds, marginal reeds and the submerged roots of trees. The spawning process can appear rather frantic with groups of fish chasing one another about and splashing along the surface around the spawning site. The female fish can produce a huge number of eggs – a large female can easily produce in excess of half a million! Once laid, the eggs take approximately a week to hatch, depending upon the water temperature.

Early Days
Initially the young bream feed heavily upon planktonic animals in the water column. As they grow they gradually start to alter their diet, preferring to feed on the bottom, where they hunt for benthic invertebrates including worms, molluscs and insect larvae.

Bream Or Skimmer?
It’s a good question and anglers differ in their opinion. In tcf’s view a skimmer is any bream that retains its bright silvery flanks. As soon as they start turning grey or bronze, they become a bream. In weight terms any fish over 3lb is a bream and not a skimmer in our view.

Bottom Feeders
The adult common bream is highly adapted to feeding amongst the silt and debris at the bottom of the lake or river. They have a tube-like protrusible mouth, which enables them to suck buried food out of the sediments. The bream finds its food by sampling the bottom as it travels around its watery home. It’s important for the bream to keep monitoring its environment because its food tends to occur in clumps. Buried food is detected using numerous taste buds in and around the protusible mouth.

Shoal Fish
Bream are highly communal and live in large shoals of similarly sized fish. Once a shoal has found an area particularly rich in food it will harvest this before moving to another high concentration of food. In this way the bream makes good use of its time and wastes little energy hunting for food in poor areas. This is why pre-baiting works so well. Put down enough food and you can hold a shoal of fish for a long time.

Silt Feeders
While feeding the bream has an amazing ability to sort the food items from the unwanted silt in its mouth. This is done through a series of water movements within the mouth that enables the fish to wash the silt away while retaining the food. Even very big fish will happily eat small items, which is why squatts are so popular with bream anglers. It takes ages for bream to filter out all the squatts and so they hold the fish for a long time. Bream have also been shown to absolutely love fishmeal and are suckers for pellet feed.

It’s A Bug’s Life
The common bream is popular with bugs. It may be because the fish possess a thick mucus layer (‘bream slime’ in angler speak) or perhaps because the bream is not the most athletic of swimmers, but whatever the reason bream, particularly when young, are attractive to parasites!