The Angling Trust England Ladies coarse angling team produced one of the most sensational second day performances ever seen in winning the 20th FIPSed Women’s World Angling Championships on the magnificent river Sava in Radece, Slovenia from 24th – 25th August 2013.

The setting for these championships was out of a picture book. Sitting between mountains on either side the river ran through a beautiful tree lined valley with a track allowing easy access to the pegs but more to the point it was crammed full of fish.  Vimba, barbel, odd carrassio and bleak were to make up the bulk of all catches with long pole being the only method worth considering except for the odd bleak weight being taken on 4/5 meter whips.

The venue had been used in previous years for the world youth team championships and a European event so some information was available in advance of the match. Even so nothing could fully prepare the team for the kind of fishing that was in store.
18 teams competed in this 20th championship and the match length stretched from near the angling club house up to the town bridge. From downstream end peg A1 to upstream end peg E18 the depth varied considerably from top 4 pole sections deep to top 6 deep. Floats used varied from 3 gr to 8 gr and hook sizes 12 to 18.

Practice went well with all the team registering at least one day when they caught 10 kilos in the allotted 4 hours. The Vimba were averaging around 200 grams with the largest pushing 500 grams making them the number one target species.
It was always going to be a difficult match to win with the strong Hungarian, Czech, Croatian, Italian and host nation Slovenian teams having spent many previous hours fishing the venue.

After day one England were seemingly out of contention when they recorded 38 points and 8th position behind Croatia on 26 points.

Except for an odd tweaking the management team saw no reason to change tactics for the second day and went into the match with a really positive attitude hoping to make the podium.
To make up the 12 points deficit on leaders Croatia and eventually beat them by 4 points was incredible but even more so was the fact that they demolished all the 7 teams in front of them from day one.

Dick Clegg OBE International Events Manager stated  “I was proud to be there to see this magnificent winning performance that must go down as one of the best team results ever. The whole squad should be justifiably proud of what they achieved in Slovenia and I can only congratulate them and their superb management team on winning Gold. I know I am always making an issue about funding,  but surely this result will give the ladies a great boost in their search to find a sponsor.
Dave Brooks manager, Joe Roberts coach and Ed Warren did a brilliant job in organising the team and I am sure that Jeanette Halliday who was making her World Championship début will continue to be part of the squad.
I personally would like to thank all the companies who provided goods for our fund raising efforts and in particularly Sensas who once again supplied all our groundbait.”
Coach Joe Roberts was over the moon. Joe said “Terrific venue, terrific fishing, terrific team. This was a proper fishing venue and England always seem to excel when there are loads of fish to catch.”

Manager Dave Brooks who has been in charge for the past four years, but has attended every Ladies World Championship for the past ten years was almost lost for words.  Dave is quoted as saying “ I have seen the team win Gold, Silver and Bronze medals, but this must be the best comeback on record to go from 8th to 1st and win by 4 points after being 12 points behind is unbelievable.  It’s a just reward for all the effort and hard work the team put into their fund raising just to make sure that an England team could take part in the World Championships.
They are a great bunch of girls to work with and all of them are brilliant anglers and totally committed to team work. It was an honour to be able to work with them and I look forward to defending the title next year in Portugal. Thanks to everybody who helped us get there.” 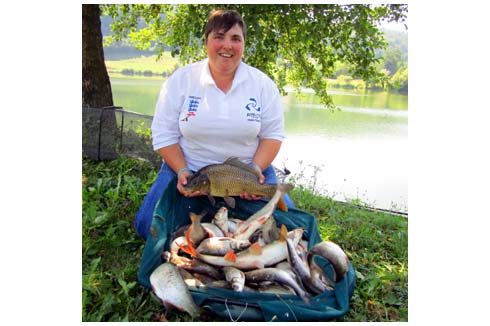