This massive yellowfin tuna caught off Mexico is probably the biggest ever landed on rod and line, but it can never be claimed as an IGFA All tackle World Record for the species.

The mighty fish was landed by John Petruescu while fishing aboard ‘Excel’ nearly 1000 miles off San Diego and skipper Justin Fleck has revealed its weight at 459lb, which would be some 44lb bigger than the current record, although a claim for a 427lb 8oz fish is pending.

Justin Fleck’s weight is based on a tape measurement formula – at the time of writing the boat is still fishing and the tuna still has to be officially weighed when Excel docks this week.

However, Petruescu will not be able to claim a record because a deckhand had to grab the rod during the fight to steer the tuna around the anchor. The fish battled for two hours after taking a skipjack tuna bait on what was Petruescu’s first every 16-day sportfishing trip. 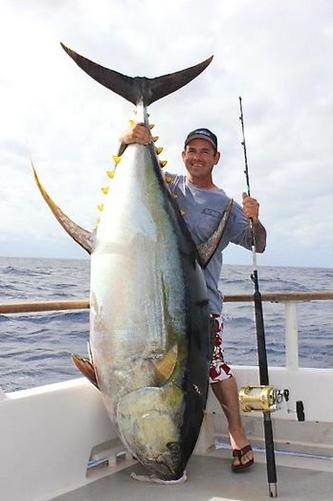 John Petruescu’s yellowfin tuna is probably the biggest ever landed on rod and line,
but he won’t be able to claim an IGFA world record after a deckhand grabbed the rod.