All credit to the LoughRee Lanesborough Angling Hub for running the championships last weekend, their first coarse angling festival. With a determined effort and all odds against them the community hub recreated scenes of anglers on the bank of the once famous Lanesboro’ Hot Water Stretch that have not been seen this decade.

40 anglers fished the competition over three sections A – adjacent to the power station, B – The east bank south of the bridge and C – the west bank in Ballyleague north of the bridge.

With the unseasonal cold weather currently affecting angling across Ireland big weights were not expected but the organisers had hoped the fishing would have been a little better for those competitors who made the journey to Lanesboro’ to compete. It was difficult fishing and plenty of skill was required for the nets of small roach the best reaching just over 3kg for the two days.

Badly affected by the Asian Clam infestation and a downturn in angling tourism to the area the hub were keen to show the world that Lanesboro’ is still on the map and anglers are welcome. There is a temporary ban on keep nets on the venue and for the purpose of the championships new nets were kindly provided to all competitors by Inland Fisheries Ireland, IFI. But the machinery is rolling today to trial the removal of the clams and they hope for a brighter future very soon.

Lanesborough is back on the map, partnerships have been formed with the relative agencies and we can expect to see an improved 2016 festival on the venue. Well done to all. 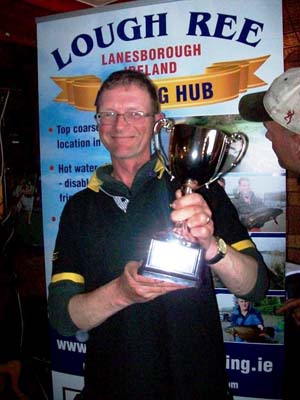