JK Tackle backed Mick Timson (see photograph) made the ‘double’ for the second successive week with a magnificent bag of 58 lb 4 oz of quality carp from peg 11.  Mick caught mainly from the margins in less than a foot of water on pellet and corn, although he also took a few fish on long pole across to the island at 14m.

Second placed Dave Kent (Long Eaton Victoria AS) landed 33 lb 8 oz from peg 9 for second place, with the bulk of his catch coming from ‘the track’ on corn (presented at 10m on the pole) in the final hour (also see photograph).

The next three places were quite close.  Terry Phillips (Wykin AC) took third from peg 8 with several carp on long pole for 14 lb 8 oz.  Ian Hughes (Coventry) fished similarly for a small carp catch of 13 lb 14 oz at peg 6.  John Adamson (Kobra Feeders) on peg 3 weighed in 11 lb 6 oz of skimmers, all taken on pellet fished at 11m

The next Makins Thursday match will be on Lizard (Phase 2) on 5th February.

Report:
In spite of the bitterly cold weather and east wind, everyone caught fish in the Makins Wednesday Kobra Affordable Open match on Lake 4.  Although most caught roach, the three anglers catching carp filled the top three places .

Following on from last week’s double success, JK Tackle’s Mick Timson fished a brilliant tactical match on peg 8 to take top spot with 25 lb 4 oz (photograph attached).  Mick took three carp on straight bomb and corn in the opening three hours before switching to pole at 5m with caster to add around 14 lb of silvers (roach to 12 oz and a perch of 1½ lb).  This put him 8 oz clear of Kobra Feeders backed John Adamson (peg 11), who landed 4 carp, a bream and a skimmer for 24 lb 12 oz and second place.  John caught 3 carp on straight bomb and corn before switching to pole (13m) in the final 90 minutes to take another carp, a bream of around 3 lb and the skimmer on pellet, losing a big bream just beyond the landing net 15 minutes from the end.

Korum ace Andy Findlay took third spot with a carp and a bream to total 9 lb 2 oz from peg 5.

Next Wednesday match, 4th February, will be on either of Lakes 2 or 4 (Makins Phase 1). 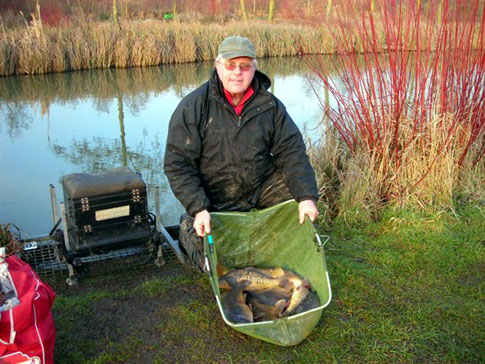