107 anglers competed in the 2008 Maver Classic final, held at the prolific Larford lakes on Sunday 4th and Monday 5th May.

Changeable weather and atmospheric conditions made the fishing difficult (by normal Larford standards) with many fish preparing to spawn. This did not, however, stop some monstrous weights being recorded over the two day event. A total weight of 11,425lbs was recorded, which equates to over 106lbs per man. With a line-up that read like a ‘who’s who’ of UK match fishing, the final result was always going to be close, as was born out with three anglers recording perfect two point scores.

Sunday started with heavy rain as the anglers made their draw and began the match. The sport on both the Match and Arena lakes was prolific and the average weight on the Arena was over 130lbs per man. Maver Barnsley Blacks star Andy Oldham recording the top weight with a massive 195lbs 6oz, just short of the lake record. On the match lake Pemb Wrighting put 191lbs 7oz on the scales from peg 40 opposite the island to win his section. Both men catching shallow on the pole consistently throughout the day.

Over on the Specimen lake it was Steve Ringer leading the way. Drawn on end peg 4 on the Burr bank, Steve utilised his space to catch in the margins, recording 121lbs 3oz to comfortably win his section and the lake. Will Raison, drawn on fancied peg 80, fished the splasher waggler and groundbait to put 99lbs 12oz onto the scales for a section win.

Monday’s weather was much better, but the flat calm conditions posed their own problems. With Will Raison drawn on peg 40 of the Match lake, and fellow England star Des Shipp drawn on peg 20 of the same lake, they quickly became the favourites to win the event.

With the difficult conditions it was hard to gauge who was actually going to win, as both Des and Will appeared to be struggling in their sections. Over on the Speci lake day one section winners Pemb Wrighting and Darren Cox had been drawn in the same section, and it was Darren who was leading for the majority of the match, until the last hour and a half where Pemb caught 8 carp down the edge to take the section and ultimately the whole event with a superb 131lbs 11oz giving him a perfect 2 point score and a massive 323lbs 2oz overall weight.

In very tight fought sections on the Match lake Will Raison narrowly beat Mark Eaves on the next peg by less than 4lbs to take B section with 116lbs 15oz giving him another perfect 2 point score and an overall weight of 216lbs 8oz, putting him second in the final standings.

In A section Richie Hull put in a late charge, catching a better stamp of fish in the margins on meat, but it was Des Shipp who took the section with 107lbs 12oz, giving him a perfect 2 point score, and an overall weight of 187lbs 11oz putting him in third position overall.

Three anglers were also tied on 3 points meaning the remaining two main frame positions would also be decided on weight. 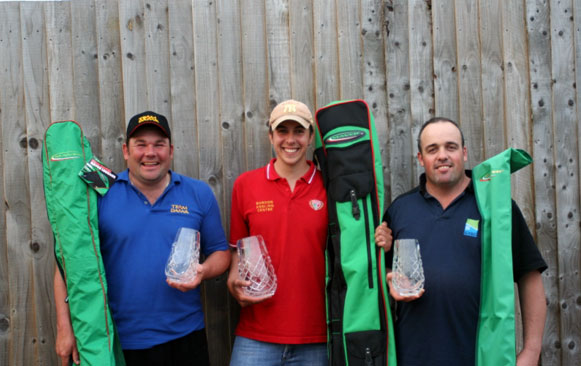