Testing tackle to the limit is vitally important to Fox International. When we launch a new product – whether it’s a box of Arma Point hooks or a £200 reel – our consultants spend a huge amount of time testing the products to their limit.

But, following Ian Chillcott’s extreme testing of the Fox Stratos 12000 MAG reels, whereby he left them in sandy water for many hours, before spending days repeatedly casting with them, Fox wanted to take the testing of the new Stratos 12000e Graphite reels to the next level.

A harsh environment was needed, an environment that would see the reels put under more strain than ever before with the chance of landing powerful fish that would eclipse the fighting power of the biggest carp. It was decided: Chilly would go conger eel fishing with carp gear!

Fishing on board the Fox-sponsored Brighton Diver boat out of Brighton Marina, Chilly would use a Fox Horizon SFD Spod rod, a new Stratos 12000e Graphite reel and new Fox Horizon braid to land conger eels from a wreck 100ft below the water’s surface. And, to pile on the pressure even more, Sky Sports’ Tight Lines cameras were in attendance too – if the gear couldn’t cope, it would all be on national TV for the angling world to see!

The morning was spent catching cod to 5lb, a severe test in itself when you’re pumping the fish up from these extreme depths, with mid-day being the time that skipper, Paul Dyer, expected the conger to come out to play.

He was right, as at 12.35pm, Chilly hooked into a conger – it was now or never for the ultimate tackle test. With the rod bent to its absolute limit, and the reel’s clutch set as tight as humanly possible, Chilly was locked into the battle of his life. The look on his face suggested it was a battle that even he didn’t expect.

The conger made two pretty severe lunges as it attempted to make its way back into the wreck, both times forcing Chilly to just hold on to ensure he didn’t give the fish an inch. But, after a pretty nervy five minutes Chilly appeared to have the fish won and only needed to pump the fish to the surface to claim his prize. This would be the true test of the winding power of this awesome reel.

But, following a 10-minute battle Ian Chillcott had indeed landed a 50lb conger eel on a new Fox Stratos 12000e Big Pit reel! How many other carp reels on the market can boast that claim?!

Steve Cole, Fox media and publicity manager, had this to say: “All of our products are tested for many months in their typical environments, but there are times it’s important to take a product out of its comfort zone to ensure it really is as good as we believe it is. This was just that time!

“We are confident in this reel’s awesome power, but taking it into such an unknown environment and going into battle against such an awesome fish was a huge test. And, having the Sky TV cameras to film the battle added extra pressure – if the rod and reel failed, it would be on national TV for the angling world to see!

“But, as you can see from the pictures, the Stratos 12000e Graphite Big Pit reels passed the test with flying colours. I wonder how many other companies would go to such extremes to test their products, in front of the TV cameras too?!”

The footage will appear on a future edition of Tight Lines on Sky Sports.

More information on the Fox-sponsored Brighton Diver boat can be found at: www.brightondiver.com 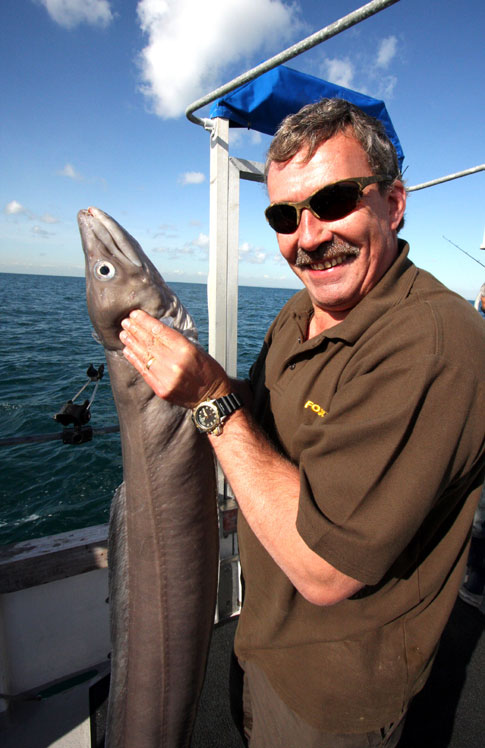