The 2008 F.I.P.S.ed organised World Carp Championships takes place next week from Thursday 23rd to Sunday 26th October in South Africa where a strong NFA Carp Team England sponsored by HS Works will be looking to improve upon last years bronze medal and bring back team gold.

The venue itself will be on a 25 mile damned reservoir in the Bloemhof region of South Africa, and will be full of small carp, meaning endurance will be key to success.

The 10th World Carp Championships will be one of the toughest events to date with temperatures set to exceed 40 degrees and fishing conditions at levels few anglers will ever experience. The fishing rate will also be at a level unknown to anglers in this country as the number of fish needed to bring back the medals will need to be in excess of 800 fish per pair.

With such demands placed on the anglers, England Manager, Mitch Smith identified fitness as a key requirement for anglers, commenting, “I have selected a young team this year, which has the fitness required to perform on such a tough venue. We have assembled the best squad possible and I am confident that we will finish on the podium.”

The team travelling to South Africa will be Billy Flowers, Jamie Londers, Ian Huntington, Peter Holehouse, David Greenland and father and son combination Andrew and Thomas Maker. Thomas Maker is an exceptional young angler and the team is very excited about his prospects in South Africa. The team will be managed over the weekend by NFA Carp Team Manager Mitch Smith, who will be accompanied by HS Works representative, Terry Asseter.

Dick Clegg, NFA International Events Director added, “The style of fishing that the team will need to excel in is very different to what they will be used to. However, I have watched the team twice and they have proved on both occasions that they are very good at catching fish quickly, something that will be key to winning gold this year. From what I have seen of this team I believe the team has a hell of a chance of success.” 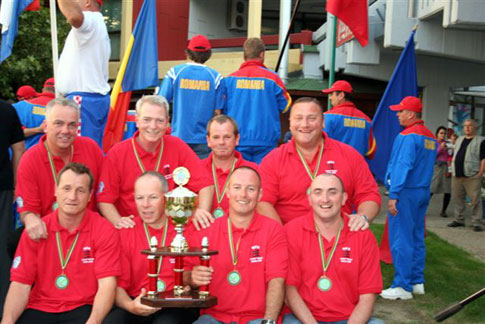