Weight: Shoals of small perch of a few ounces often pester anglers and a fish taken between 1lb and 2lb is seen as a good catch. On venues where there are large populations of small species like minnows, gudgeon and small rudd, specimen fish of 3lb-plus are seen as a real specimen and a 4lb fish something special. Just occasionally a perch of over 5lb appears, but these are very rare in the UK.

Length: Rarely exceeds 35cm, but some have reached 50cm

Age: Thought to live for up to 13 years in the wild

Preferred habitat: Is found in almost any stillwater and canal in the UK along with slow -flowing rivers and streams. They don’t however like fast-flowing waters. Perch are often found close to structures such as sunken trees, bridges, wooden and metal pilings, but are most at home hiding out in among the vertical stems of thick reed beds, where their camouflaged flanks allow it the blend in with its natural surroundings

Feeding: Has a natural diet of sticklebacks, minnows, crayfish, water beetles, nymphs, leeches, mussels and its own fry. Being a predator, they are active throughout the year; however, the smaller fish hunt in shoals during the summer where on some venues they become a nuisance. The bigger specimens are often solitary and prefer wait in ambush in the darker waters and gullies by underwater features and pounce on large prey

Hybridisation: Is not known to cross-breed with other coarse species

Spawning: Move into shallower water between April and May where eggs are laid in batches of between 1,000 and 210,000. The sticky threads are attached to reeds and tree roots that then hatch in around two to three weeks, depending on the water temperature 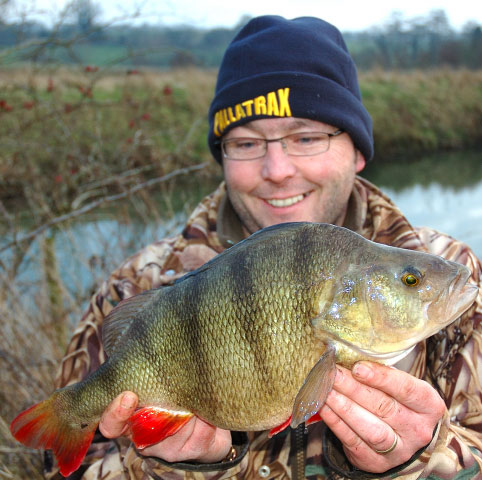 Colouring
There’s no mistaking the perch with its greeny-brown upper flanks that turn a golden green below the lateral line before becoming cream-colour on the belly and with eight dark, vertical bars along its length.

Mouth
The perch has a short rounded snout, but looks can be deceiving, as when it strikes at its prey its jaws extend outwards and open wide to engulf its meal. The fish does have numerous teeth, but they are very small.

Eyes
Being a predator the eyes are set well forward to enable the perch to exactly target its prey. They are large with a golden iris surrounding the pupil.

Pectoral Fin
Convex in shape, these are watery orange in colour with the odd spec of deeper orange.

Dorsal Fin
There are two halves to the perch’s dorsal fin. The front has solid rays tipped with up to 15 sharp spines and has a dark spot covering the smaller rays. The rear is connected to the front by a small membrane and has softer rays.

Pelvic Fin
These are also convex in shape with thick rays and are predominately orange in colour.

Tail/Caudal Fin
The full, almost spade-shaped fin is what gives the perch its acceleration when it ambushes its prey. The upper half is a light orange with a deeper coloured tip and the lower half a deep red/orange.

Perch Disease
For old fellas like me, perch featured heavily in our early fishing experiences. A worm fished under a float often caught us a wriggling perch, sometimes smaller than our bait! Then, in the 1970s, perch populations across the country crashed from a mystery, ulcer-forming disease. During the 1970s big perch were virtually unheard of. Then in the early 1980s a small stillwater in Kent, Furnace Pond, began to produce a string a huge fish which eventually led to the current British record being caught, a 5lb 9oz fish. Since then, perch numbers have steadily recovered and today huge perch are caught from many lowland rivers and pits and even commercial waters, which should not really be great habitat for big stripeys. They grow much bigger than our record in other parts of Europe.

Perch Territory
Classic perch territory is clear, weedy lakes or slow flowing rivers where the fish can use their great vision to hunt prey. They are one of those species whose natural range in Britain was once limited to the south east, but man has spread perch north and west, moving it as both a sport but especially a food fish.

Strings Of Eggs
Perch have an unusual spawning habit because the females lay over 200,000 eggs in jelly strings which can be over a metre long. They are fairly casual about what they lay their eggs on – submerged weeds are normal, but sunken junk (shopping trolleys, wire fencing) will do just as well for the female fish. In warm summers, over 95% of the eggs could hatch successfully, producing vast numbers of hungry, young fish which can overwhelm a fishery, grabbing any maggot or worm lowered into the water. However, cool summers or predation from other perch and pike kills off many of the young fish and perch populations often show cyclical changes when several good years, producing lots of fish, are interrupted by poor years with few perch coming through. Those that do make it, though, can be big ones! Poor water quality can be another killer of perch, since they are a pretty sensitive species, especially to low oxygen levels.

Early Risers
Perch tend to spawn quite early in the year (April–May), when water temperatures reach 8-10ºC), so the fry can grow quickly before other species produce their young. In warm southern waters, small perch reach 8cm by the end of their first summer, 10-12 cm after their second summer and 15-20 cm after three summers. At this age, some fish, usually males, will sexually mature and be ready to spawn.

Growing Pains
Growth rates can be very variable across the country: a deep, cool northern loch might produce 10-year-old, 8oz fish, whilst a shallow southern pit can yield 10-year-old, two or three pounders. Perch usually live for 10-13 years although some research has found fish more than 25 years old!

Hunters
Perch are beautifully-made predatory fish: a striped, camouflaged body, big eyes, swift and highly manoeuvrable – they often hang under weed or close to bank sides, ready to ambush prey. But surprisingly, many studies have shown that fish can form quite a small part of perch diet, the bulk being small invertebrates like shrimps, midge larvae and mayfly nymphs. However, some fish suddenly start to grow very quickly from around five years old and it could be that these perch eat mostly other fish and go on to be the real whackers. This could be why heavily stocked, commercial waters can produce such big fish, preying on the large numbers of small silvers. Fish of a certain size tend to shoal together, so if you can locate one big perch, there may well be others close by.

Boom Years
The last four or five years have been the best for decades for the perch, with more 2lb plus fish around than anyone can remember and some rivers like the Upper Great Ouse, Kennet and the Thames capable of throwing up number of three, four or even five pounders. It’s possible that this cycle of massive fish could be coming to an end as they die through old age, but if fish continue to come through from different year classes the boom in big perch could continue. Let’s just hope we never see the perch disease again.

Food For Thought
Across much of Europe, perch are highly valued as food fish. This was also true in Britain until the 1960s – indeed, a commercial fishery in Lake Windemere caught perch in traps that were tinned and sold as ‘perchines’ for food during World War II! Things are very different now, but anglers should bear in mind that people coming to live here from different cultures and other parts of the world may well happily take specimen perch home if they catch them.