YOU can either have the fanciest plotter in the fleet but with no knowledge of what the unit was built to do, it will become nothing more than a pretty picture with an icon representing a boat in the middle.
On the other hand could have a ‘cheap as chips’ basic unit, and combined with a little knowledge, you could be producing results any charter skipper would be jealous of.
The Collin’s English Dictionary describes to plot as the following: ‘Plot – to mark position; to make map of…’ And in its simplest form, that’s what we’re going to do.
The following method can be used to plot any bottom feature including wrecks, weefs, individual rock marks, sand banks and other sand features.

= Vessels track over the sea bed 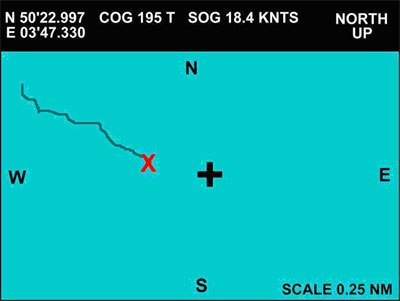 Step 1
Turn your system on and zoom out to appropriate size screen for the distance you intend to travel, say 30 miles. Press the key pad to arm the unit’s cursor, dig out the damp moth eaten book full of numbers of fishing marks you fish, or intend to fish {every good skipper has a well used one}. Now move the cursor around the screen in the area where you think the feature should be until the latitude and longitude numbers of the cursor {usually displayed at the top of the display screen} line up with those in the old book of tricks. Your unit should now give you a course and distance to run, from the boat’s position to the cursor position you have chosen. Leave the cursor turned on and steam towards the position zooming in on the screen size as you get closer to your target {to do this effectively the plotter needs to have a zoom facility which will allow you to zoom in to at least 0.25 nautical miles}. 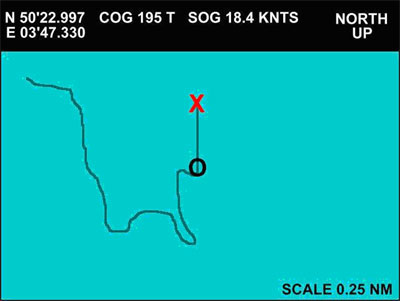 Step 2
Right, you have now steamed to your chosen destination, and the plotter is zoomed in to 0.25 miles {for the purpose of this exercise we will say the feature we wish to find is a wreck}. Turn on your fish finder and select the 50KHz wide beam, which is good for searching over a large area. At a slow speed cross over the cursor position from all the points of the compass, until the wreck starts to show on the fish finder screen. Now turn the fish finder from the 50KHz beam to the 200KHz narrow beam, which is used for pinpointing exactly what is beneath the boat. Relocate the wreck, turn the unit’s cursor off and press the event or mark button so that a mark icon is left on the screen exactly where the wreck is. 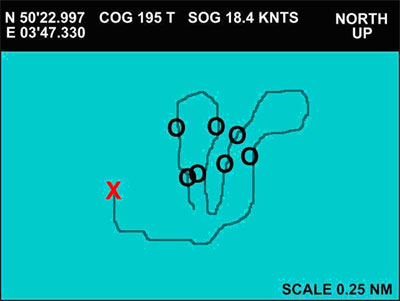 Step 3
With the boat traveling at slow speed, cross over the mark you have left and the area immediately around it from north to south, south to north, east to west and west to east to find out exactly how the wreck lays on the sea bed. Each time the wreck appears in the fish finder beam push the event/mark button and when the wreck starts to leave the beams coverage push the event/mark button again {most fish finder screens scroll from right to left so the most recent reading is always at the right hand side of the screen}. Basically push the button when the wreck appears at the right side of the screen, then again when it starts to disappear from the right side of the screen. 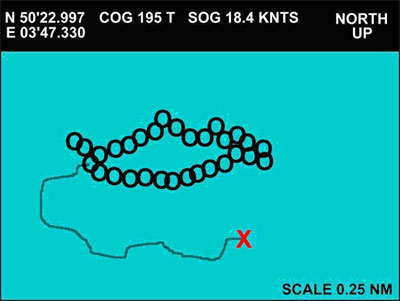 Step 4
The end result should be that the complete circumference of the wreck is represented on the screen, by a series of mark icons which join to provide a perfect picture of how the wreck lies. Delete any miss placed marks to avoid confusion but be careful when using plotter delete menus as you can easily wipe the wrong marks, or lose the whole lot at the push of a button. 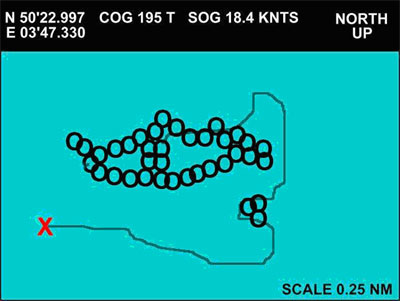 Step 5
This graphic picture of the wreck you are about to fish can be further customised. High points on the wreck and any wreckage which surrounds the main wreck can be added using the same technique, or if your plotter will allow, you could change the icon or its colour to differentiate between the main outline and areas of lesser importance within the plotted picture.

Debrief
Well there you have it, how to use your plotter to turn sea bed features into easy-to-understand graphics which will be displayed on your plotter screen. The most important use for this is now you can hit the same spot, time after time with serious accuracy. Gone are the days where wrecks were so stuffed with fish that you could miss the mark by miles and still catch a bin load. Don’t get me wrong, there is still some seriously hot fishing to be had, but it just takes a little more accuracy. You will probably find that the fish will be located in a tight shoal, on a certain part of the feature and now not only can you aim the boat at the feature but also find where the fish are with precision, then aim at them with the confidence that your plotter will show exactly where you are, at any given time.