The Bass Masters is a 6 series competition held throughout the year in Weymouth aboard “Revolution” skippered by Josh Simmonds.

The rules are simple, the best 10 fish caught throughout the series are added together for the final weight and all qualifying fish have to be over 3lb in weight.  This is  a fun filled event with a huge “I want to win ” attitude by all anglers wanting to become Bass Master 2007.

Dawlish man Tim Smith was crowned 2007 Calcutta Bass champion with a total weight of 58lb 4oz bagging along the way a fish 8lb 12oz a couple at 7lb and a 6lber.  Tim wins the Bass Masters Trophy 2007, £150 in cash and £50 worth of Calcutta Flashfoil Shads, kindly donated by the man himself Jim O’Donnell.  Second prize went to 68 year old Charlie Norton from Devon, with the heaviest fish of 12lb 4oz, winning £50 prize money a packet of Calcutta Flashfoil shads amongst other goodies.  3rd prize (2nd heaviest weight) went to Bristols Darren Moon with a total weight of 52lb 4oz.  4th was Somersets “Geoff Norway Reynolds” with 44lb 13oz . Final position went to Geoff Rendall from Watford with 40lb 15oz.

I’d like to thank all involved especially the crew for being a joy to fish with and Jim O’Donnell for sponsoring the “Revolution.”  Dates for next year Bass Masters can be found at http://deepsea.co.uk/boats/revolution/moreinfo/news_board.htm 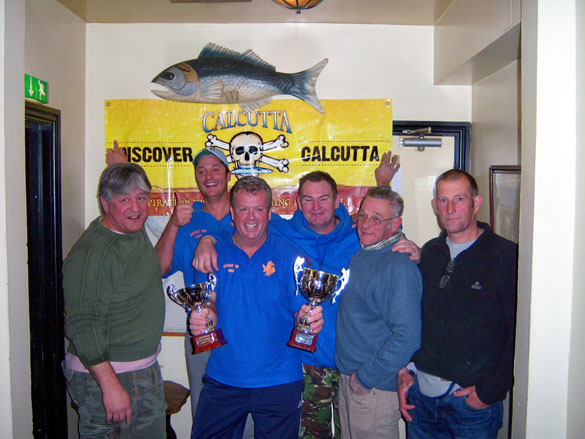 Picture shows, All the winners with Calcutta Banner