The International Rules League fished at Barston Lakes is now in its fourth round, with the Dave Brookes (pictured with his catch) coming out on top this time thanks to a 13-12-0 catch from peg 63.

Dave, who somewhat bizarrely was fishing for the England Ladies team (!?) fished short pole and bloodworm over a 50:50 mix of groundbait and leam for a bag of small F1s, a dozen roach and a bonus 1lb perch.
In the same corner Gary Pook on peg 67 fished bloodworm and maggots over groundbait at 13 metres for a second placed 11-3-0, again mainly small F1s. Third placed Paul Downes tied with Mick Barlow on 9-4-0 but could potentially have gone one better had a cyclist not accidentally broken his pole with an hour to go! In the league standings Daiwa Dorking lead from Kamasan Starlets Blue. 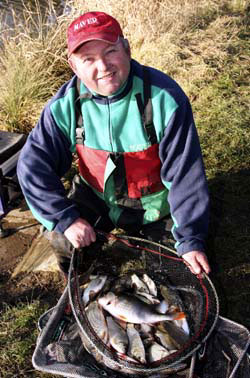