Two more giants of the deep have been washed up along the north east coast of England – fish that simply should not be there.

The first awesome three-metre-long oarfish was discovered by a member of the public near some cliffs at Tynemouth Pier this  week. A second was washed up at Hauxley on Monday, the second oarfish to be washed up there in a matter of weeks.

That one made the national press, including The Sun as well as the national angling weeklies, but experts are no nearer explaining why the warm water fish are suddenly appearing in the North Sea.

The first specimen is in near-perfect condition and has been taken to the nearby Blue Reef Aquarium where aquarists will try to determine how it died.

The world’s longest species of bony fish, the oarfish can grow up to lengths of eight metres – although there have been reports of individuals more than double that length.

Due to its great size, bizarre appearance and strange undulating way of swimming it is thought the oarfish is responsible for many ‘sea monster’ sightings over the centuries. It is also known as the ‘King of Herrings’.

Blue Reef curator, Zahra d’Aronville, said: “Until relatively recently sightings of oarfish were incredibly rare. These creatures live at depths of up to a kilometre and have hardly ever been filmed.

“This is only the fourth specimen to have been recorded since 1981, however another, more decayed animal, was washed up earlier this month near Amble and prior to that a third individual was discovered near Cleveland back in 2003.

“Very little is known about the life cycle of these truly magnificent creatures and it’s a mystery why two of them should have washed up on our coastlines so close together.

“This particular individual is in really good condition and there are no obvious reasons why it should have died. At this stage it’s impossible to tell whether it was alive when it stranded or whether the currents simply washed it ashore,” she added.

Oarfish are a pelagic species found throughout the deep seas of the eastern Atlantic Ocean and Mediterranean Sea. They are usually found at a depth of around 600 feet (200 metres), although they have been known to go as deep as 3,000 feet (1,000 metres).

Their diet consists mainly of plankton, small crustaceans, and small squid that they strain from the water using specially formed gill rakes in their mouth. In turn, the oarfish may be a food source for larger ocean carnivores such as sharks.

OnlineFishing.tv’s north east angling correspondent Sam Harris said: “This This makes me wonder just how many have been washed up and have not been seen or found.  Why they should suddenly appear in the North Sea, I can’t explain.” 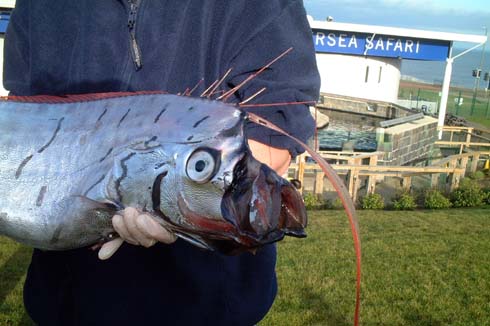 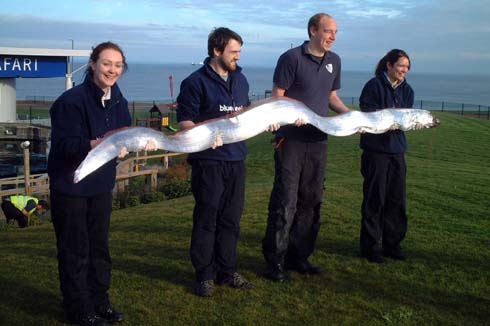 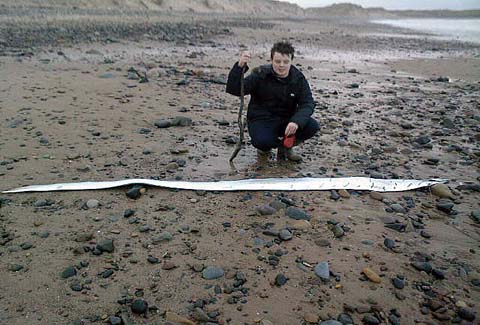