While English football goes Brazil nuts over the hot-house jungle location of its World Cup opener against Italy on June 14, soccer fans heading in droves to the Amazonian capital of Manaus are guaranteed a cultural and ecological awakening.

If you have been lucky enough to secure a ticket, you are in for a treat for the senses. Manaus holds a significant place in Brazilian history as the epicentre of the 19th century rubber boom.

Things To Do In Manaus

Its glory days may be long gone, but the city has emerged as a dream ecotourism destination from which to explore the Amazon rainforest’s mega-diversity of animal and plant species.

High on the Manaus must-do list is a short riverboat trip to the world-famous ‘meeting of waters’, where the black water of the Negro river meets the muddy water of the Solimões to create one of nature’s most spectacular sights.

For a full-on wildlife adventure just a few hours from Manaus there is beautiful Lake Balbina (Barragem de Balbina) where spectacular fish, including Peacock Bass and Piranha, await the novice and most seasoned of anglers.

Temperatures will be soaring in June (high 80°s F/30°s C) and humidity will be topping 80 per cent, so cool off a little in central Manaus – an impressive heritage hot-spot steeped in buildings of national pride.

Step back a couple of centuries to the opulent era of the rubber barons to marvel at the stunning opera house (Teatro Amazonas), built to rival La Scala or head to the city’s Art Nouveau marketplace (Mercado Municipal Adolpho Lisboa) where you can buy anything from fruit and veg to stuffed Piranhas. And don’t miss the city’s main cultural centre (Centro Cultural Palácio Rio Negro) – home to several excellent small museums. 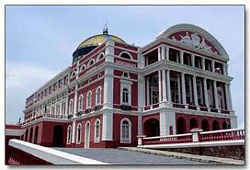 Manaus’s Belle Epoque opera house was built at the height of the city’s rubber boom in the 1880s – an icon of wealth and refinement.

All the materials used were imported from Europe with the exception of timber, which was taken straight from the rainforest. These included around 200 Italian chandeliers and an elaborate painted curtain from Paris depicting the countryside of the Negro and Solimões rivers.

The 700-seater theatre’s spectacular dome is covered with thousands of tiles painted in the colours of the Brazilian flag.

With the demise of the rubber industry in Brazil, the opera house lost its wealthy patrons and closed down for 90 years. The government ploughed millions into renovations in the 1990s, preserving all the original colours, art and design.

Today Teatro Amazonas is home to the Amazonas Philharmonic Orchestra. It hosts a diverse calendar of musical, theatre, dance and film events, including an annual Opera Festival. 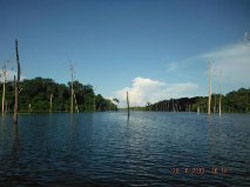 Balbina Lake is within driving distance of Manaus and www.amazon-angler.com has the ideal rustic lodge retreat on the lake for the avid lure angler and novice alike. It’s a superb location to fish for Peacock Bass.

Stories about the Amazon’s Peacock Bass are legendary. No other freshwater fish attack lures harder and with such pent-up anger as these beautifully-marked Cichlas.

The Peacock Bass in Lake Balbina are nearly always structure-related and will be tight to cover, ready to ambush any unwary baitfish. Surrounded by the Amazon rainforest, the lake is full of thousands of dead trees and plenty of islands which create a natural habitat for these ferocious predators. If you want to go fishing near Manaus, this is where we recommend. 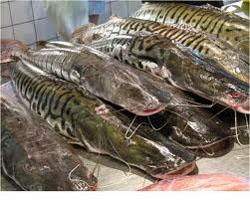 Another recently-renovated product of the rubber boom era in Manaus is the city’s main marketplace – an absolute delight to the senses and a photographer’s dream.

Smells, sounds and colours of the Amazon mingle beneath the Art Nouveau architecture, which was inspired by the Les Halles market in Paris. Notable features are the stained-glass windows and the iron framework made in Gustave Eiffel’s Parisian workshop.

Thousands of shoppers flock to the market daily to buy the freshest of fruit, vegetables, meat, poultry, olives, herbs, medicinal plants and cooking flour. Jaw-dropping fish – from the plain curious to the positively prehistoric – peer out from the fishmongers’ stalls.

Sample some of the tasty and exotic offerings served in the authentic restaurants housed within the market. You can guarantee that wherever you dine at night, the food on your plate will most likely have originated from this very market.

Confluence of the Rio Negro and Rio Solimões

Just a short boat journey from Manaus port it is possible to witness one of nature’s more bizarre phenomenons, the so-called ‘meeting of waters’. Many city centre travel companies offer river trips which include the meeting of waters and other interesting sights.

Here two tributaries of the mighty River Amazon converge – the dark waters of the Rio Negro and the sandy-coloured waters of the Rio Solimões.  The difference in colour is due to the composition of the water.   The Negro, not disimilar to black tea, is darker because it gathers leaves and foliage en route from the Andes.

For about 10km the two rivers flow side by side, unable to mix due to differences in their temperature, speed and density. Eventually, the rivers yield, converge and head east towards the Atlantic Ocean.

Manaus port itself is worth exploring, being one of the world’s biggest floating ports and a popular destination for ocean-going vessels. 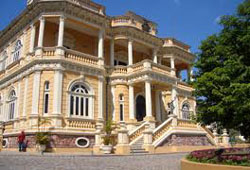 Built as the residence of a German rubber baron, Manaus’s splendid neo-baroque cultural centre was bought by the government in 1918 and served as it’s state headquarters for over 60 years.

Renovations began in the mid-eighties, transforming the building into five separate museum spaces, each paying homage to a different aspect of the region’s cultural heritage.

A permanent ‘People of the Forest Exhibit’ has a working replica of an Indian village and is staffed by members of several different Amazonian tribes. Observe them producing traditional flour from the wild mandioc root or making tucupi – a cooking sauce made from the same root which is poisonous when raw, but edible after considerable boiling.

There is a fine-art gallery housing around 350 Brazilian works of art, a Coin Museum and a Sound and Image Museum including a rich archive of photos, books and documents.