borwickfishing.co.uk  would like to see some matches held there during the winter months and is looking for a match organiser.  borwickfishing.co.uk has two types of match in mind. In 2006 and 2007, twice weekly open sweepstakes were held which were well supported and had winning weights over 100lb.  The fishery would like to run either one or two opens a week this winter and would give a £2 discount per peg which the organiser could keep for running the match (or put to club funds or donate to charity).

Matches catches have continued to be good at borwickfishing.co.uk with several winning weights over 100lb and an average winning weight of 47.7lb over all the matches fished this year. Fingals Fishpond was the first pool to top the magic “ton” with a weight of 119lb 10oz on 30th December 2007. However through 2007 and 2008, Griffish has produced regular weights in excess of the ton topped by very pleasing 129lb. Dewhurst Deeps is not far behind with a weight of 105lb 13oz in February 2008, with Fingals just following at 99lb in August. It may seem somewhat surprising that many of the best weights have been recorded in the cooler months between November and March. However closer consideration reveals that the fish tend to be fairly tightly shoaled in the deeper water in the winter and on-site bailiff, Jimmy, uses his up to the minute knowledge of just where is fishing to peg matches on the shoals.

The fishery also like to run a winter league and with the former Lancashire Winter League now defunct, there is an opportunity to resurrect or replace it. It there was a demand, to provide variety borwickfishing.co.uk would be happy to make up to 6 pools available for the series. This means with teams of six anglers fishing a six match series, it would be possible to have a section on each pool enabling each team member to fish on each pool in turn and produce an even team result and a fair individual winner.  If you would be interested in entering a team or organising, then please get in touch by emailing info@borwickfishing.co.uk or talking to Jimmy (07984 399637) or John Harding (01829 732748). 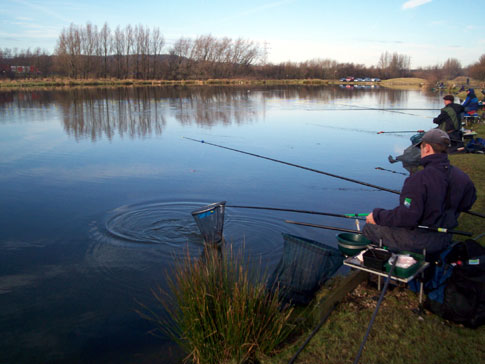