Team Championship victory for local team Scunthorpe Red at the Angling Trust Division Two National Championship 2012. But all the talk afterwards was about the announcement that the 2013 Division Two national will be fished on a commercial stillwater for the first time.

Team wise it was a convincing performance from Scunthorpe Red for whom six of their anglers scored 30 points or more out of a possible 34 points and they deservedly took the winning trophy with 286 points.  A sure indication that local knowledge paid off on the day of the Angling Trust Division Two National Championship on Saturday 28th July on the Scunthorpe A.C. water on the Stainforth and Keadby Canal.

Mike Storey, Club Secretary of Scunthorpe Red said “One or two of the team were fortunate to draw near bream and made the most of this while the other anglers maximised the opportunities of their pegs.  Graham Frith, Team Captain who caught eels and rudd typified this.  The team obviously had a home advantage,  but still used their water craft to maximise their own points.” 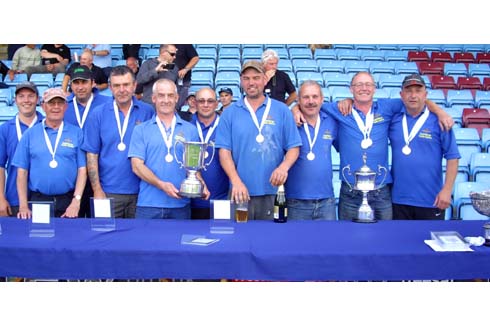 A total of 33 teams fished the National Championship,and some sections of the canal had been producing good catches of bream in practice sessions, and so it also proved to be on the day.  Favourite areas were B and C section which provided ten of the top fifteen individual weights.

All the top individual anglers on the day caught bream and skimmers with worm and casters being the best baits. As a back up most anglers relied on fishing squats on light tackle which produced lots of small roach and perch, which for some anglers were boosted with a tench or a bream to bump up their weights.  Out of all the anglers who fished the event there was only one blank.

A worthy individual winner was Jason Jones fishing for Mansfield and District on peg C 15. Jason weighed in exactly 20 kilos which is a fantastic weight for a canal match. His catch was largely made up of bream up to 1.5 kg on caught on caster and worm fishing both a groundbait feeder and the long pole.

Runner up on the day was Paul Moutrey fishing for the local team Scunthorpe Red, another bream catch weighing 15.320 kg from peg K 34.  Third place went to John Stutley fishing for Ampthill and District with 15.050 kg from peg B33.