Lago di Bolsena, the massive volcanic lake of over 113 square kilometers, nestling in the picturesque Italian countryside was, once again, the venue for the 2013 World Carp Classic. A tournament that was ultimately to create carp fishing history and break all records for the event that was celebrating its 15th year anniversary.

After a hard fought competition, the trophy went to Lizette Beunders and Bianca Venema, who brushed aside their opposition to win by one of the biggest margins, over 173 Kgs (382lbs), in the history of the competition. New to the competition, it was a case of first time lucky for winners Lisette 43,  and Bianca 37,  the first all-woman team to win the trophy, fishing for Team Dynamite. This Dutch duo took the lead on the first day and all except for day two, kept their noses in front with consistent catches and weights.

The tournament is more than just the fishing, beginning with two days of events, Saturday’s entertainment kicking off with the hotly contested Gladiator games and concluding with the huge lakeside party, the culinary delights included a massive 600 serving Hungarian goulash cooked in the Guinness world record cauldron. For all of the cake lovers, the 15th anniversary cake was made by Chef Terry Greenhouse, a world champion several times over in different culinary fields and he was ably assisted by local Chef Patissier from the excellent ‘Dolcevita’, Francesco Basili. Francesco trained at the Sacher hotel in Vienna, world famous for its patisserie and the Sacher Torte named after it. World class food and fishing!

The mood on Sunday, despite the after effects of the party and the rain, couldn’t be dampened and by 4.00 pm everyone was ready for the parade of flags through the narrow streets of the idyllic medieval town of Boolean, 27 countries being represented. This was followed by one of the most important part of the whole week: the peg draw. With 320 anglers hoping to draw the fancied spots, this was a tense time for all.

During the course of the five days and nights of the contest, beginning on Monday afternoon, the weather was changeable. The rain that fell throughout the weekend, did little to daunt the anglers as it continued into the first night and day. A particularly variable wind that changed strength and direction several times also featured during the five day event. The rest of the week was, thankfully, drier although the final night and early morning was punctuated by a spectacular storm. Rather than hindering the Dutch pair, they fished the higher water levels and weather conditions better than most to land a tournament record of 40 fish for a overall combined weight of 366.5 Kgs (806lbs 6oz).

Consistency was the key to their success with fish coming regularly to their rods.The pair were confident going into the last day that their lead was enough, but stiff opposition and a ‘never say die’ competitive spirit from the other teams in the frame meant they could never relax until the final hooter. Fancied UK duo Lee Jackson and Rob Tough fishing for the Mainline Carpworld team, made a great late bid to claim second place, their claim coming alive in the last two days with 18 fish, with third place going  the Italian pairing of Antonio Monad and Francesco Capannini with a 20 fish haul. 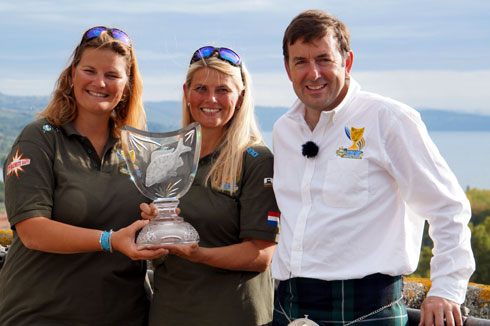 Winners Lizette and Bianca tell their story of the tournament:
“We always knew we were in with a chance as fish come out all over the lake, but when we drew our peg in Solar Tackle section we were happy. Research is always vital, and we had a good idea of what was needed. Our swim was in the south west corner of the 43 kilometre bank, near the small town of Capodimonte. During the 2012 competition it produced only one fish, despite that, we were happy with the draw. We spent most of our first day checking the depths and finding the features, once we had those figured out, we set our marker at 180 metres over 8 metres of water, over a hard bottom behind the weeds. We set up two rods on this mark: left and right. This marker itself is made by Markerworld and is great for using on big lakes like Bolsena.

“Working hard, we found another hotspot over a hard bottom, in between high and low weeds. This spot was very difficult to find especially during the high waves, but we chose not to put a marker in, so we could leave it as natural as possible. We fished one rod at 6 metres deep on this definite holding area. On the 3 metre contour, we also found a patrol route where the carp were going through the weeds.
“All week we fished at distance and this meant the line was very important, we used 25lbs floating braid made by Pro Power. The rest of the gear was: Shimano Technium MGS 12000 XTB reels, XS1 rods in 3.25lb TC, ACE end tackle, Sufix Invisible Flurocarbon and Razor point hooks. All of our rods produced fish during the tournament. We had spare rods fully prepared and baited, so that every time we caught a carp, we cast straight back in the feeding spot, wasting as little time as possible.

“Our biggest weapon was the bait and how we fed it into the swim. It was important to start off and continue a consistent feeding regime during the week. There were two parts, feed and hookbaits, to our baiting strategy. The key was not to have anything exclusive, we wanted plenty of different flavours and particles, so the fish were always curious and finding new food items. Our plan was to make sure that the carp didn’t become stuck on just one bait, which could become blown, meaning the fish could move away.

“The first day we put in 60 Kgs of bait (about 4 buckets) and continued this for every day of this session. We used a mix of different kinds of chopped up boilies: Red Ammo, The Source, White Chocolate & Coconut Cream, Sardine & Anchovies, Banana Nut Crunch and The Crave. The flavours we used were all of equal quantities and we also added hemp and mixed particles in this mix. Alongside all of the chopped boilies, we also used different kinds of pellets: Halibut, (chopped) Tigernuts, Red Krill, XL Carp Pellets and The Source, all in different sizes. We mixed them together with the crushed boilies into big, sticky, heavy feeding balls glued together with Black Amino groundbait, Coconut groundbait and stick mixes of The Source and Spicy Tuna. We fed 3-5 balls of this mix, concentrated around the hookbait, each time we cast out, along with two to three handfulls of (chilli) tigernuts. As you can see we used quite a big range of Dynamite Baits: boilies, pellets, flavours, particles, hemp, (chilli) tigernuts and
chopped tigernuts, flavours and groundbaits. This was to create different layers of attraction in our swim, in both the horizontal column of water and vertically across the lake bed.

“The second part of our strategy was the hookbait, we didn’t just stick to one bait. We used a selection of hookbaits during the week, Dynamite Baits Red Ammo, Monster Tigernut, Banana Nut Crunch, Fluoro pineapple/banana pop-ups and aniseed pop-ups. This multi-strand baiting strategy and different feeding methods kept the carp feeding, and kept us ahead. As you can see from the results: the most fish ever landed, with the heaviest weight in the 15 year history of the World Carp Classic, it worked!

“Of course, thanks go to everyone who helped us during the event, the marshals, the organisers and the people of Italy who have been so hospitable. We’re delighted to be the first women’s team to lift the trophy and would like to thank our team sponsors Dynamite, Ace and Shimano for all their help in taking the title. We’ll definitely be back!”
This year’s event is the first that Dynamite, Europe’s biggest bait company is the Title Sponsor, and their Export Sales & Marketing Manager, Daryl Hodges was on hand to comment:
“Lizette and Bianca have a fantastic record in carp fishing, Lizette being the women’s world carp record holder with a fish of 8l4b 5oz, whilst Bianca has recently landed her PB common of 54b plus, they’re our kind of anglers! We see our sponsorship as a perfect fit with our brand, the carp scene is Dynamite’s number one priority which is why we have chose to work with Ross and his team and support the WCC, the best carp tournament there is anywhere in the world.”
Ross Honey, founder of the event was delighted by the spectacular outcome:

“This is a fantastic way to mark our 15th Anniversary, the conditions were changeable and Lizette and Bianca worked with them to pull off a fantastic win. Once again Lake Bolsena has produced a massive haul of its sensational carp. There has been a huge amount of work that has gone into making the World Carp Classic what it is today, an event like this is down to a dedicated team who put in many hours of work. Along with the management team, volunteers, bailiffs and the townsfolk of Bolsena and the surrounding towns and villages. We also have to thank all of our principle, section and support sponsors, who’s dedicated partnerships make this event possible. Spomb for example producing unique products for this event, and Reuben Heaton, who have been with us from the very start, producing 15th anniversary scales especially for us. We are proud to celebrate our with so many anglers, friends and sponsors in such a beautiful setting. We look forward to seeing all of our competitors, sponsors and audience again at next year’s bigger and better event.”