The Barbel Society Officers have recently launched a petition on the government website calling for the removal of the current legal protected status of otters. This follows on from their 2018 petition calling for ‘non-lethal controls’ which was comprehensively rejected by the government. The Angling Trust has been asked to respond and the following statement from our CEO Jamie Cook can be read below.

“As someone who has fished for barbel, and other river species, since I was a child I’m well aware of the initial impact that the return of otters has had to some of our river species, particularly where they had been absent for generations. However, I’m also aware that thriving fish populations and indigenous predators are not mutually incompatible in healthy river systems. Blaming declines in fish abundance solely on predation makes no sense, particularly in light of of the latest figures showing that water companies discharged raw sewage into rivers and coastal waters in England more than 400,000 times last year. This is a 37% increase on the 2019 figures of 292,864 incidents. Agricultural pollution is equally shocking and on the Wye – a river that currently has healthy populations of both barbel and otters – the amount of harmful phosphate entering the river from poultry farms and other sources is now estimated to be the equivalent of a 20-tonne truck full of pure chemicals being emptied off Hereford Bridge twice a week. It is for this reason that the Angling Trust and Fish Legal, alongside WWF are taking the EA and DEFRA back to court to demand stronger enforcement of regulations to protect our rivers.

And there’s another important reason why the Barbel Society petition is not only ill considered but downright dangerous. Recent years have seen a growing trend in groups wanting to either see our sport banned or at least seriously curtailed. Look at the recent report, endorsed by the Prime Minister’s partner, attacking catch and release fishing. There have also been attempts to ban all angling in marine protected areas and at the Sevenoaks Wildlife Reserve in Kent. We have had a good year with angler numbers rising as a result of the Angling Trust’s successful campaign to keep us fishing throughout the various lockdowns. We are respected by both politicians and the public for benefits we bring to both society and the environment. This is our greatest defence against the antis and the last thing we need to do is to provide an open goal for angling’s enemies.

The petition organisers should be honest. Their petition is not about dialogue with the Angling Trust or anyone else, it is a doomed call to the government to remove legal protection for otters so that they can be culled. That’s what the organisers have been calling for on social media and elsewhere and that’s exactly how it’s already being perceived by the public. This petition will achieve nothing other than to give further ammunition to those who want to see angling banned. As last time, far from the 326 MPs needed to vote to change the law, I doubt they will find a single supportive MP and it will be dismissed even more forcibly by the government than the last one. And what will have been achieved other than alienate hundreds of thousands of people against our sport and make it harder for us to win those battles where we can actually make a difference with policy makers?

Should anyone doubt what I’m saying about the outcome we took the precaution of sending a copy of the petition to two of the most knowledgeable and pro-angling parliamentarians in the country. You can read in full below what Sir Charles Walker MP and Lord Benyon have to say but the message is clear. This petition is going nowhere.

Since my appointment last year I have been contacted on a handful of occasions by Barbel Society representatives and was scheduled to speak at the PAG predation conference before COVID intervened, so this is not a subject I have a problem with discussing. By and large I have had good discussions, however this has ground to a halt when they not only objected to us lobbying to keep the nation’s anglers fishing over the last year but directly accused me of lying about fishing being prohibited in January 2021 despite proof in the form of written statements from three different government departments.

I would respectfully request that if the Barbel Society does wish to work with me and the Angling Trust that they desist from launching damaging stunts like this otter petition and that they leave their insults and egos at the door – the issues and challenges facing fishing are too important for anglers to be divided by personal vendetta.

There’s no doubt that this petition does angling more harm than good. That is not to say that I do not recognise the concerns but if change is the objective then yet again I fear the leadership of the Barbel Society have missed the mark. We are not blind to this issue and where we can make a difference, we are. Carp and stillwater fisheries can be badly damaged by otters so we have helped leverage and allocate over £2.6m in the past decade for the fencing and protection of these fisheries.

For any barbel, or other anglers, reading this who do wish to move forward positively please consider joining the Angling Trust.” 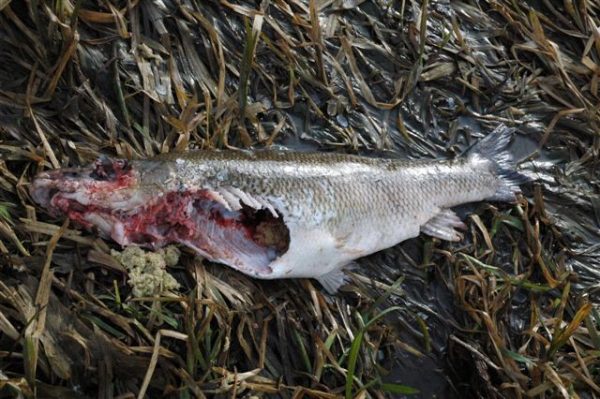 “The return of otters to our water courses has been almost universally welcomed by the public. I cannot think of a better campaign to put anglers on the wrong side of public opinion than for them to be appearing to pave the way for an otter cull”

“Like most people I take delight in seeing otters return to our rivers, much as a result in the reduction in pesticides coupled by good fisheries management. Anglers would be alienating a large proportion of the wider community, including many important allies in the battle for cleaner waters, by seeming to call for a cull of otters through removing their legal protections.”